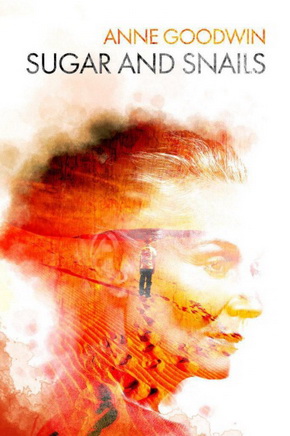 What are we? Are we what we want to be? Or are we what the society wants us to be? Do we live freely? Or do we live in boxes? So many questions of identity, but we might only have one answer for all those, and it’s the complicated one. Identity is never an easy thing to talk about, it’s not even easy for us to ponder and decide the essence of our own identity. Anne Goodwin, in her debut novel Sugar and Snails, tries to formulate an answer of her own, where she uses a coming-of-age story to point out the restlessness we always feel when it comes to choosing, or determining, our identity.

For years Diana Dodsworth has been living alone, no love no husband, no boyfriend even. She only has one best friend and is busy with her job as a junior lecturer in the psychology department of a university. It seems to go on that way until one day her best friend, Venus Najibullah, introduces her to a widower colleague, Simon Jenkins. Diana never thought before that this time she would really fall in love with a man, but that happens and there’s nothing she can do about it. Lucky her, Simon feels the same way too and appears to look forward to having a serious relationship with her. Unfortunately, it’s still so hard for her to have such kind of relationship with a man, especially with her complicated past, teenage, rush decision, and never-ending restlessness even after making the decision. All those things continue to shadow her and gnaw away at her confidence as a woman, and as a human being. At the end, the only question swirling around her is: will other people accept her the way she is? Will the one she loves take her as she is?

Questions of identity will always be following us since there is no way we can avoid the clash between “the self that we want to be” and “the self that other people/society want us to be”. And that doesn’t only happen to teenagers, in my opinion. Adults can experience the same thing for the simple fact that society has a certain standard of “what we should be”, and when we fail to meet it, there is a huge possibility that the society will judge us wrong/deviant/strange and eventually banishes us from the group. And that’s what Diana cares a lot about: people’s approval. For thirty years she’s been afraid of “what people say”, clearly proven by her reluctance to bring her birth certificate out and her pretense of having fear of flying just so that she won’t have to produce her passport. She is described as a coward, afraid of facing the consequence of the decision she made in her teens.

Identity is a complex problem anyone could have, and the answer will always be rooted in our upbringing. To my thinking, we were all born pure, not knowing anything and not even realizing anything. As we grow up, we are molded into “someone”, consciously or not, by our parents, our family, our friends, and/or our environment. Whatever the result, that’s us. If we happen to experience an identity confusion then, once again in my opinion, it might be because our parents do not give us enough attention/guidance for us to be confident about ourselves. When our parents are not there for us, we will certainly seek for another role model, anyone who cares about us and gives us examples. And that’s what is being reflected in Sugar and Snails, where the main character doesn’t get enough love and attention from both parents and eventually turns to a friend for the role model.

Basically, Anne Goodwin’s Sugar and Snails has a nice story and a narrative style engrossing enough to make us keep reading to the last page. The overlap between the full-of-confusion past and the present which is filled with complexities and fear is woven ever so neatly that it’s capable of making the reader understand what actually happens, though it still needs time for them to recognize who actually the main character is in the past. The weakness of this narrative is, unfortunately, the love story. It lacks the intensity I think is needed to convince the reader it is the trigger for Diana-Simon conflict introduced at the beginning of the book. I also have a problem with the ideas implied in this novel. It’s not only the thing about identity (as I have elaborated above), but also about gender. If this novel really aims to blur the distinction between genders, then why creating “labels” instead? The saying that “boys don’t cry, that’s what girls do” and the moment when Andrew muses, “My fear of fighting, if nothing else, was proof I wasn’t meant to be a man” seem to me like an act of putting “labels” on people, on both men and women. What’s more, Andrew says he hates his body at some point. Now, this book seems to be in a campaign to love ourselves the way we are, so why the hate? If he hates his body, then he hates himself.

All in all, Sugar and Snails is not a bad book, but I just have disagreement with it on several things. I also think this book is the antithesis of its own message. So, as a whole, this book can’t be said to be a thorough work.