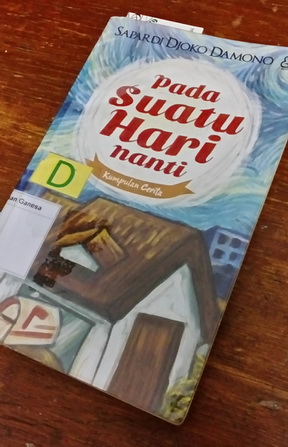 In terms of packaging, Pada Suatu Hari Nanti, Malam Wabah might look like Sapardi Djoko Damono’s recently-released other book, Trilogi Soekram, where it is actually a bundle of his old, separately-published stories. This bundle of two short story collections however, which first came out in 2013, offers so much more than what Trilogi Soekram can: deviation from common folktales and thoughts beyond our reach. It was just difficult for me to get into some of them.

This first short story collection is filled with narrative jokes, critiques, and twists in response to folktales commonly known and passed on to (Indonesian) people. The legendary tales of Rama-Sita, the neglected stepchild, the sly mouse deer, Ken Arok-Ken Dedes, and Malin Kundang are made into their deviated versions. The results are truly beyond what the reader could imagine: some are geniusly funny, some are sharply critical, some are just playing around, some are imaginations of what it would be if the situations were the other way around or completely different, and some are what happens when the writer merely uses the characters of a story to make a totally new one.

The second collection consists of short stories originally composed by the writer and have never been published before. They are as unique as those of the first one, going beyond what we call humanity and trying to represent the animatedness of non-living things (if that’s even really possible). Here, Mr. Damono doesn’t only play with narratives, but seems to give “things” air to breathe and a chance to express themselves. Stories like Rumah-rumah, Sepasang Sepatu Tua, and Daun di Atas Pagar clearly prove the idea. Houses, shoes, and even leaves on the trees in our yard are made to look like they have feelings and thoughts and are capable of speaking up their minds when something happens to them, minds unknown to or unheard by human beings. There are stories about humans, too, ones which delve into their deeper parts of hearts and souls. Here, the writer attempts to express what happens to both when something unusual occurs, what we wouldn’t think about or take seriously even if it has such a great effect on us.

It is not unusual for Mr. Damono’s narratives to have typically simple, uncomplicated plots and style of writing or dialogues that do not seem extravagant, but they always contain deep meanings and/or sharp critiques of things rarely occurred to readers of his work. The short story entitled Dongeng Rama-Sita bears this very feature, where Mr. Damono reverses the narrative of its original tale (if you’re familiar with the tale of Ramayana) and makes Sita refuse to come back to Rama and choose to stay with Rahwana instead. At this point, readers might think that Sita is a fickle, unfaithful woman. On the other side, however, Mr. Damono seems to want to portray her as a woman who is free to choose, not a woman who is merely resigned and accepts anything predestined for her, as her character should. The number entitled Dongeng Kancil also interestingly talks about destiny. As (Indonesian) readers might have known, Kancil (mouse deer) is always described as smart and sly that it can trick any other animal. But what if Sang Juru Dongeng (the Storyteller) doesn’t want it that way anymore? What if, instead, the Storyteller makes the mouse deer tricked by another animal? This kind of twist is not the only main attraction of the book, for Malam Wabah short story collection is also packed-full of hidden criticisms as its feature, especially in the number entitled Membimbing Anak Buta. On the outside, it appears only to be about a mother who’s taking her son wandering around a big city by bus. But that’s not the point. Along the journey, Mr. Damono seems to criticize the chaotic, unruly condition of the big city. He also discreetly criticizes the character of our nation, where we are famously “rich” but so proud of getting “aid”.

Mr. Damono’s Pada Suatu Hari Nanti, Malam Wabah can be thought of as an exceptional work. It has peculiar stories and unusual ideas, despite the simple language and narratives. It doesn’t mean, however, that all of the short stories contained here are obscure and beyond us, although it is also true that some of them feel strange and difficult to stomach, such as Ditunggu Dogot and Malam Wabah, the title story. Here Mr. Damono, so much like in Trilogi Soekram, shows off his penchant for criticizing things in a neat, gentle, sometimes absurd and often funny way. Beside Membimbing Anak Buta, it’s also proven in the quote below, taken from Membunuh Orang Gila:

All things considered, I have to say that Pada Suatu Hari Nanti, Malam Wabah is a work of a genius. The only problem was at times I felt hindered from understanding every single idea, from immersing myself in its obscurity.