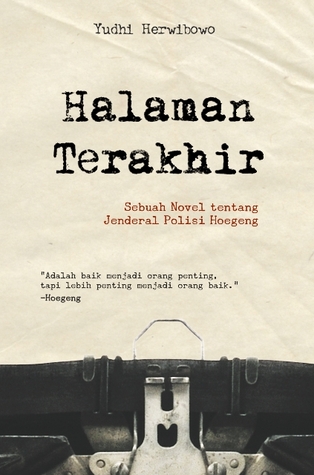 “It is good to be an important person, but it is more important to be a good person,” reads the front cover. People may find it morally impossible in the world that is so full of burning ambitions to be a person of importance rather than a person of good morals. People can and will do anything and everything to get what they want and think that “what’s right what’s not” is only for fairy tale goers who don’t know how this world works. But that’s what Halaman Terakhir wants to set up straight. This historical crime drama novel by Yudhi Herwibowo doesn’t only talk about Hoegeng, the legendary Indonesian police commissioner, but also the possibility of being a good person and doing the right thing.

The book begins with a cut-down scene showing Hoegeng hesitating over reading the assignment letter which will send him off to Belgium as an ambassador. The message is clear: he is actually not given the honor of representing his country abroad, but is discreetly sacked from his job. He knows it, and he knows why. As the next chapters unfold in flashback, readers will see that he is in the middle of investigating two cases which, slowly but surely, gain nationwide attention for allegedly involving people of great importance and many high-ranking government officials. He cannot just sit there and idle while an innocent girl is raped and left running in circles because the local police do not do anything but trying hard to prevent the real culprits from being found. He cannot just be quiet while smuggled fancy cars running around the capital city without anyone knowing how and where they are coming from. Hoegeng knows his job and won’t let anything nor anyone get in his way. But he also knows he is not the one who has control over the country, and thus has no control over the tricky cases. The moment he tries to do the right thing, that’s when the power so much greater than him takes over and banishes him from his post.

Halaman Terakhir might be a historical novel about Hoegeng Iman Santoso, the legendary police commissioner who is known for his honesty, modesty, integrity, and firmness in doing his job the right way. However, on a closer look, it is not only about the legend fighting for justice in an era full of corrupt government officials and media shutdowns, but also about justice itself. This idea is largely represented, or rather, brought out, by the “supporting” characters making appearances in and driving the entire story. Characters like journalist Djaba Kresna, police officers Jati Kusuma and Wulan Sari, and also lawyer Setiaji Darsono are ones who, aside from Hoegeng, project strong moral principles of justice and integrity. It is them, rather than Hoegeng, in my opinion, who manage to bring out what this book intends to tell the reader, which is to keep standing up for what is right whatever the pressure put upon us. At times, they can even steal the show with their actions and dialogues more than Hoegeng should. It is really such a shame that the character of Hoegeng, despite his greater portion of appearance, is in fact shining dimmer than the others. His portrayal doesn’t show strongly enough for him to be the central character, and only gives the impression of being a passing-by actor.

Be that as it may, Yudhi Herwibowo manages to impress me this time. Halaman Terakhir is a truly wonderful combination of inspiring story, flowing, thorough narrative, and simple yet gripping style of writing. All those show that Herwibowo is indeed an experienced writer. The dialogues he uses feel quite natural, though I’m still uncomfortable with the use of the word “engkau”, which I deem too poetic. But that’s beside the point. It’s just one minor weakness I’m willing to forget in the face of his excellent way of narrating. What’s more, his use of Javanese language, which is necessary for the sake of the story background, is just in the right dose. He doesn’t only give the meaning and/or explanation on footnotes, but also cleverly blends them with the sentences so that readers can understand them then and there. It renders the narrative flowing and effective, as his storytelling is. The entire plot can really flow constantly and smoothly: no holes, no bumps, no inconsistent pace. In short, it’s totally enjoyable and riveting. Each case is elaborated in clever detail, even in every twist and turn Herwibowo manages to overcome all the obstacles that might hinder the reader from having satisfying excitement. Even Hoegeng’s background story, needed to build the foundation on which this book is based, can blend perfectly together with the fictional characters and subplots that develop the whole story. And that’s not the only interesting feature of this book. Despite showing the New Order with its pesky, controlling government and corrupt officials, Herwibowo doesn’t give the impression of unfairly judging or casting aspersions on them. Instead, like most of his characters here, Herwibowo appears to be pretty fair in presenting the so-called “dark times of the modern Indonesian history”. You could say he’s very objective, proving that not all government officials of that era were as vile as most of people/modern writers think. It’s like fresh air in the middle of today’s stinking literature.

All in all, Halaman Terakhir by Yudhi Herwibowo is a massive work. In spite of some flaws in the presentation of characters and the use of one awkward word, this book can be counted as a successful work of fiction. Inspiring, objective, and entertaining.