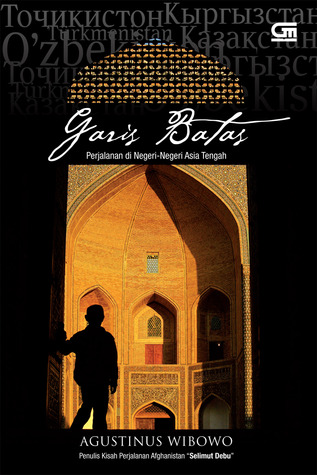 What people can expect from travel writing is the traveler’s experience, that is the reason they read it in the first place. But Agustinus Wibowo has so much more to offer to the reader, as his second book, Garis Batas, describes the problematic border between the countries of the former Soviet Union in Central Asia. Garis Batas, or Borderline, is not only talking about traveling: how to get to a certain place, what’s unique and what’s not, the dos and don’ts having to be obeyed in that place, the culture, the people, etc. It explores the numerous societies and the history that damagingly shaped them.

Leaving Afghanistan, Agustinus Wibowo gets across the river of Amu Darya and sets foot in Tajikistan, one of the five countries located in Central Asia. He continues his journey to Kirgistan, Kazakhstan, Uzbekistan, and, last, lands on Turkmenistan. In those countries, Wibowo finds himself witnessing the worst and the best of countries that have just “recently” been freed from USSR, the poverty that strikes some of them, the sudden wealth that drives some others to do, and to be, nothing, the continuous search for their own national heroes, the confused criss-cross of their borderline, the different yet similar societies. Here, Wibowo records the hushed though obvious background information on every culture, every language, every people, every history, and weaves them together into a magnetic nonfiction story of a mind-blowing journey.

I didn’t have any expectations whatsoever about how Wibowo would present the result of his exploration in the form of writing. But I was truly astonished by the way Wibowo reveals his adventurous travel in places most people uninterested to come to. His smartly hilarious way of “storytelling” may not be new to me, since I’ve become quite familiar to it by several novels written by male authors I’ve read so far, but Wibowo’s language is revealing, and unjudgmental yet unpretentious in conveying how bad and problematical the situation in Central Asia is. Through his words, Wibowo also admits the cultural gap that is undeniable when it comes to “visiting another country”. Once a waitress snapped at him:

That part of a dialogue really cracked me up. It’s a vivid proof that people may be able to master many languages, but it doesn’t mean that they can transfer the culture of those languages to the use of their own mother tongue. What a pity that there are so many typos, lost words, double words, and awkward sentences along the book. It would have been more enjoyable to read had the book been freed from the grammatical mistakes.

Aside from all the technical error in his writing, Wibowo can still successfully describe well the general social and cultural circumstances in Central Asian countries through his observant eyes, and many a time with wry humor. The best thing is, his descriptions are not coming out all alone, but they are nicely accompanied by beautiful pictures showing the people, buildings, historical places, and rituals of their religions or traditions. Both Wibowo’s written and pictorial records tell us the suffering endured by the people of their object, economically, socially, culturally, religiously. They are insecure, and they don’t know what to do. They are questioning and in need of an identity, the one which can separate them totally from their “fatherland”.

So, at the end, I would say that Garis Batas is a wonderful result of an exploration and observation compressed into one great travel writing book. And most of all, to my delight, every chapter of the book interestingly starts with a poem or an old adage of each nation, making it all the more insightful. I would recommend anyone interested in traveling or learning about other cultures to read it, and forget about the grammatical issues.