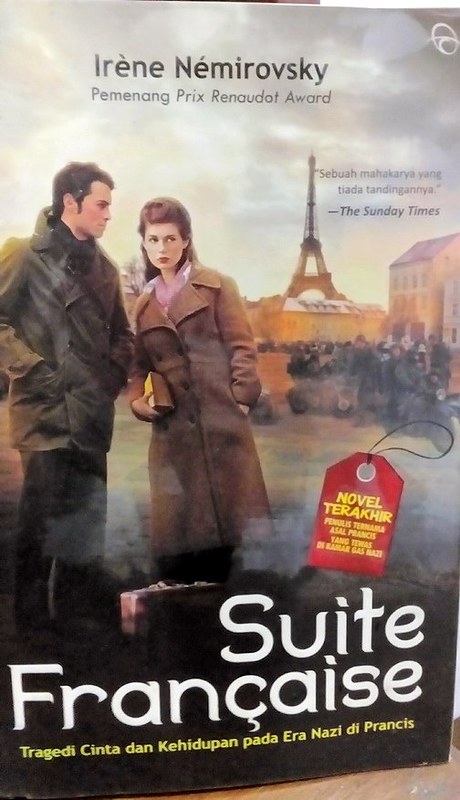 Indonesian edition’s coverAre Nazi-related literary works still significant? While history is a blur, and while the Jews were not the only people suffering horrible genocide in our historical record, the literary world seems to overflow with fictionalized accounts of the most remembered ethnic genocide ever happened on earth. Irène Némirovsky’s Suite Française is one of those sticking out of the stacks. It was first published in 2004 as an unfinished novel about a period of war laced with an engaging drama of love and the cruelly awful truth of human nature by an author who had to end up in the most tragical death of her time. While the other works of the same kind try hard to cast a bad name upon the socialist party and the country where it belonged to, Suite Française doesn’t seem to take sides and stresses more the human within both the victims and the villains.

Divided into two volumes, Storms in June and Dolce, Suite Française intricately relates the German invasion of France in 1940. The events of the first volume unfold in a description of the siege of Paris in which people run, rush off, spread all over the city to get out of it, trying to hide from the German troops and saving their own skin. This first volume shamelessly, vividly reveals the true colors of human beings when they are under siege, when they are under pressure. It doesn’t try to gloriously tell about the bravery and unity of the people invaded in the face of the invaders. Instead, Stroms in June describes how people become so selfish and so tight-fisted, thinking about themselves and neglectful of the others in a time of difficulties. It is painfully real that people, generally speaking, will not think to share their food with others while they and their families are in dire need of it, isn’t it? But Némirovsky cleverly narrates that ugly truth in a very natural way, making it shocking yet believable to read.

Meanwhile, in the second volume, Dolce, Némirovsky contradictorily tells the reader a story of love, a story in which compassion and emotion play an important role. A love story involving troubled people, people who are trapped in a war without hope, without a certain future, security, and mostly, without happiness. It sees the unexpected encounter between Jean-Marie Michaud and Madeleine, who is stuck in a country life, uncertain about herself and her feelings for Benoît, her husband-to-be. It also presents a sweetly gripping and complicated relationship between Bruno, a married German officer, and Lucile, a lonely wife who is despised by her mother-in-law. In this softer part, Némirovsky toys with the reader’s emotion to an exhausting degree, playing with human conscience, nationalism, hatred, fates, lies, and hard calls. It’s so wrenching that your heart bleeds. It forces the reader to see beyond the role of a villain and a victim, to perceive what’s inside the heart of those characters who, normally, will be condamned for their inappropriate feelings in the throes of what people fondly label as the most horrid, bloody period in the European history.

It needs a lot of patience and perceptive minds to read this book. It’s not merely talking about war, it’s not even particularly talking about the cruelty of Nazi or the hardship of their invasion era. Suite Française is more about humanity, intolerance, and how people react to the vicious action brought by that intolerance. It’s also about love and human nature, which are represented and embodied in a complicated, yet incredibly natural, portrayal of many characters. It might be disgusting to read the characters of people who set aside the importance of nationalism to save their own skin, people who can still think about their own class and rank in the middle of a war, people who are so hypocritical that they look nasty rather than poorly invaded, and people who are caged in a reality that it’s impossible for them to choose love. But Némirovsky succeeds in making us devour all those characters and concede that they are unpretentiously real.

Suite Française is actually, according to the author’s note, planned to have five volumes with thousands of pages. Némirovsky meant them to be entitled Storms in June, Dolce, Captivity, Battles, and Peace. It’s just such a shame that she could barely finish it before the French police came and got her, sending her to Pithivier and then to Auschwitz, where she died. However unfinished, the book could still captivate me completely. It is a great tale with a believable premise, real characters, smoothly-seamed separated parts, and a wonderful narrative. Though divided into volumes, each story doesn’t seem to stand on its own. They are somewhat unrelated, yes, but they are also smartly interwoven at some point. What makes it not really enjoyable to read is its awkward use of language. Perhaps it’s just the author’s writing style, or perhaps it’s the bad translation. I almost put the book down after the first pages of the first volume, but I finally stuck to it, for the engaging story and my curiosity won over me.

To put it in other words, Irène Némirovsky’s Suite Française is a great, great novel. It’s an incredibly wonderful work of literary fiction, despite the awkward writing (or the bad translation?) which brought difficulties to my reading it and its same-old boring theme. It may be unfinished and irk our curiosity, but it’s still enchanting nonetheless. And, of course, it is highly recommended to every literary aficionado.