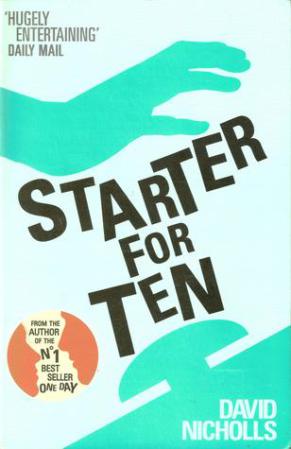 You think you know, but you don’t know anything. Being book-smart and street-smart are obviously two different things. You may know all the Latin terms in biology, but you may not probably know it when someone is laughing at you behind you. Or simply if someone you have a crush on is actually ignoring you. David Nicholls’ Starter for Ten has much of this idea. Set in 1985’s England, it’s a romantic dramedy about going through a process of growing up, in which a young man has to undergo many unpleasant experiences in order to see the error of his ways. It has a marvelous narrative, believable portrayals of characters, subtly slapstick jokes, and a message that will stick to your mind.

18-year-old Brian Jackson, a young man who thinks he knows, enters the university life as a fresh student with limited money, limited clothes, limited access to the social world, and, sadly, limited looks. Be that as it may, he believes and is very confident that there is no boundary in his knowledge and coolness. He joins the University Challenge team because he thinks he is smart and knows it all, and he is foolishly convinced that the girl he has a thing for, a beautiful-and-she-knows-it type of girl named Alice, feels the same way, too. He just never knows. But then what he thinks as it is turns out to be different in reality. Slowly, through the mid chapters, Nicholls shows us how Brian makes many unconscious mistakes: he doesn’t know that he’s hurt his best friend Spencer, he doesn’t know that his mother is suffering inside because of his indifference, he doesn’t know that Alice never likes him and even cheats on him when they’re finally together, he doesn’t know that another girl named Rebecca falls in love with him and cares about him, and, worst of all, he doesn’t know how to be happy and keep it cool without acting like he’s cool.

Brian Jackson is a pathetic excuse for a young man. Even to the end of the epilogue, he doesn’t seem to get anywhere near maturity, although the tragedy happening at the climax should have gotten his head straight. Nicholls has created him to be a poor man who is not inclined to learn his lesson. His ignorance and indifference make him the dumbest male character I’ve ever encountered in a fiction book. However, he is also one of the most natural characters in all my reading experience. I myself could somehow relate to him, and I am sure so could many other readers. Nicholls also pictures the supporting characters quite well, especially Tone and Spencer, Brian’s best friends. Such a shame he doesn’t give them more room to speak out, more space to show up and convey their influences on Brian. It is quite understandable, though, looking at the first person point of view from which the story is being told.

Starter for Ten is wonderfully told and very funny, revealing the anxiety of being young and growing up of which the process involves a certain phase of “you think you know”. A phase in which you fancy yourself in love with a star, someone beautiful and famous. A phase into which you step thinking you can be a star, but in fact you’re only a dull person with no one cares about you except for your true friends and family, people whose feelings you unconsciously hurt. It’s pretty telling, wrapped up in slapstick jokes and manly sense of humor. The downside, though, is that it has a bit fast plot and a pathetically sloppy epilogue. The plot may still seem rational, without being actually too hasty nor illogical, but the climax runs too quick to the epilogue. And the epilogue itself doesn’t provide the finish line that the reader needs. It makes the reader question Brian’s character, and what it is all about.

Frankly speaking, Starter for Ten is way better than Nicholls’ other work I’ve read so far, namely One Day. It has a more down-to-earth story, a better characterization, more hilarious jokes and all. Unfortunately One Day has a more intriguing plot, with superb twists and turns that keep the reader hanging on the balance. So, in conclusion, Starter for Ten is a quite great novel about the process of maturity, if not adolescence. Though badly executed at the finale, we can somehow relate to the said process which is well described by Nicholls.

2 thoughts on “Starter for Ten”