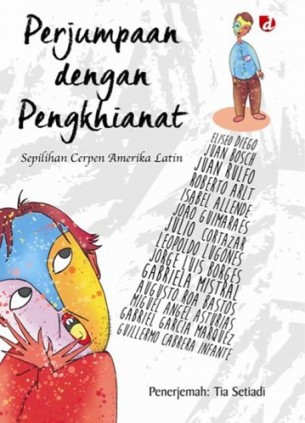 I’ve been wanting to join the Spanish Lit Month since a long time ago but this is my very first time ever truly making it true. And for this first edition I chose Perjumpaan dengan Pengkhianat, which has been on my TBR pile for almost an eternity, to read and review. You might be familiar with the English title, and it’s true that it is taken from the short story by Augusto Roa Bastos, but it is an anthology curated and released by Indonesian publisher Diva Press, consisting of fourteen short stories and one lecture.

Encounter with the Traitor is of course one of the pieces listed on the table of contents, and it’s also one of my few favorites. It is about an ex-prisoner who was years ago convicted of leaking information on rebels and once again encounters one of the victims of his deed. As the slow-but-sure storyline progresses, however, we will see that the so-called traitor was not actually the one who brought all the rebels at the time of war to their total demise. It was his brother, who then died and has been since then remembered as the hero. This short yet dense story clearly and cleverly shows us readers that wars, a particular period where everything is so tricky, deceiving and victory is the ultimate goal, can make a false hero out of the true culprit. We never know who our true enemy is behind the foggy lines.

Concerning Señor de la Peña by Eliseo Diego is the second on the list of both the contents and my favorites. Like the previous one, this is a story of deceitful reality. What you see is not always what is real, that’s pretty much the idea. Or maybe what you see is not what other people see. A new owner has come to live in a huge mansion at the border of a village, and since his arrival there all the servants try to figure out who he actually is, or rather what he really is like. Each of them sees their new master from a different point of view and therefore has a different opinion. It causes an endless debate among them and pushes them to go and take a look at him together, to see who is right and who is wrong about his person. But still, no agreement has reached, until finally the master’s brother-in-law comes and says, “What are you all looking at? There is nothing there.”

Why Reeds are Hollow by Gabriela Mistral is my most favorite of all stories that already left deep impression on me. People always dream of equality and ceaselessly, fearlessly fight for it. But at what cost? And to what extent do we need it? The reeds are throwing certain propaganda for the entire vegetation to have equal height. However, once this is realized, everything is in total chaos: clover as high as cathedrals, bushes grow dozens of feet, flowers get dried, lilies divided in two. And that’s not all. Animals are also badly affected by the so-called equality: get lost, cattle losing their fodder and finally human beings are starving. In short, the effect of equality campaigned by the reeds on the lives of all living creatures is not the good one. It ruins them, and not the other way around. You might wonder why but the answer is actually very simple: because everything and everyone is unique, they have their own characteristics, duties, functions and benefits. Everything and everyone do not need to be the same in every sense of the word, in every aspect. The world needs balance and that’s what differences are for.

My last favorite piece in this anthology is One Sunday Afternoon by Roberto Arlt. It might not be one with the newest or the most shocking premise, but its twisted, unpredictable plot will surely make readers feel tricked. When there is a lonely, bored wife – who is frequently being left at home by her busy, indifferent husband – inviting her husband’s friend for tea it wouldn’t pass the reader’s mind that she actually tries to seduce him while her husband is not around. What a perfect timing for unleashing her pent-up desire, and what a perfect person to do it with, too. But while you think that this woman is unfaithful, you’ll see that Eugene Karl, our male protagonist here, is having another idea. He might look so reluctant for a black-and-white reason, but then he’ll show you that he is not that good of a person. Later, after a very long, deep conversasion between the two, Eugene points out that the desire to get into bed with someone who is not your spouse is something normal in an empty marriage, and that any marriage will go through this particular phase, too.

It is such a shame that of the fourteen short stories contained in this rather thin book only four I could consider great and became my favorites. The rest just passed by without leaving any particular impression on me, not even those written by the greats such as Gabriel Gárcia Márquez (The Last Voyage of the Ghost Ship), Isabel Allende (Toad’s Mouth), or Jorge Luis Borges (Parable of the Palace). This might sound so odd, but I probably couldn’t see their premises as interesting. Or perhaps it’s their narratives, or the translation. And the worsts are those with very, very unacceptable ideas like Axolotl by Julio Cortázar and Yzur by Leopoldo Lugones. I cannot say anything but that they are not my kind of stories.

Perjumpaan dengan Pengkhianat is not actually a bad anthology, but the short stories it consists of just didn’t interest me. I initially had high hopes for it, as it has many famous, great Latin American writers stamped on its front cover. Unfortunately I didn’t feel connected when I read most of their works here, hence my conclusion it’s merely so-so.