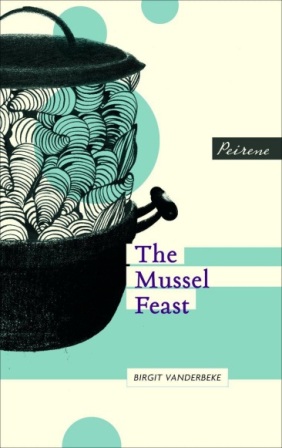 The Mussel Feast, written by the German author Birgit Vanderbeke just before 1989, may or may not be a reliable account of living in a divided Germany back when the Berlin Wall was still up and sturdy, but it definitely showcases the life of a family that lives a dangerously double life under a patriarchal tyranny. Telling from a first person point of view, the narrator without the least hesitancy pulls the reader deep into her monologue so they can get an insight into what her family is actually like. Unfortunately, this firm attitude is not followed by a certainty in what the main issue is.

The narrator, the daughter of said family, welcomes the reader to her home when it’s already the time to make preparation for their special dinner. It is special because they will be celebrating her father’s promotion at the office, which is virtually in the bag. And every time there is something to celebrate they will have a mussel feast, for mussels are her father’s favorite dish, though none of the other family members care for them much. However, it’s quite unlikely that he will be home any time soon, because even after the exact dinner time, which is six on the dot, he doesn’t show up. He is never late, they never have dinner late, except when he is away on business. This is very rare, and the three of them—the mother, the son, and the narrator—have to wait until he comes home for there is no way they will have dinner without him. The waiting drags terribly on and on, and still the father doesn’t show up. It is at this point then that the narrator starts to lay bare everything about her family: her mother’s habit of switching to “wifey mode” when her father is nearly or already at home and why she would do that, the story of their move from the East Germany to the West, their usually failed attempt to become a proper family according to the father’s ideals. And finally, as they are getting tired of waiting, the narrator hints at her family’s tiredness in dealing with the father’s controlling attitude; and when the waiting seems to almost come to an end, the narrator cannot tell whether her family is happy and looking forward to his arrival.

Through her brief, dense, no-holds-barred monologue, the narrator describes each character of her family members. But mostly, along her continuous ramblings, she tries to make it clear for us to see that her father is a tyrannical, chauvinist, haughty man who cannot take no as an answer and is attempting very hard to make his family impossibly perfect in every way. This horrendous nature alone has already rendered the father dominant both in his family and the narrative, and it’s made all the more unbearable by the narrator’s unrelenting depiction of him, so much so that he seems to overshadow all other characters, even the bold, stubborn, rebellious, smart narrator herself. That’s not what particularly draws me to it, though. It is the way the narrator appears to allude to communism, the nature of East Germany, by giving the portrayal of her father. At first it is only vague, but then it’s nearly vivid as the narrator and her mother and brother look almost relieved when the father is not coming back, because what’s the West fears of most is anything related to the USSR.

And that’s the point where The Mussel Feast is perilously ambiguous in the issue it wants to deliver. In one way, looking at the already-laid-bare character of the father, the book seems to intend to display the characteristics of something, some idealism, that people see as terrifying and thus are happy to be separated from (imagine the narrator and her mother and brother are freedom-loving people of the West in opposition to the always-controlling, dictatorial father). In the other way, however, it looks like Vanderbeke wants to put forward some gender issue. It is perfectly clear in the sexist way the father look down on his “repellent”, physically ungirlish daughter and in the hope that his son will become the manly, smart boy he deems “normal”. It is also showed in the way the mother always switches to her “wifey mode” every time the father is coming home, and the fact that she is the one who does the housekeeping stuff because it is not the father’s “thing”. A cry for feminism is practically echoing throughout the narrative, so loudly that we cannot help but hear the sound more clearly than the issue of warring isms that kept dividing the Deutchland before it finally was united again. Well, that’s said, Vanderbeke has really it in her to create an engrossing writing. The ramblings might only look like a bunch of uncontrolled recollections, but it actually is a focused monolog delivered by the narrator not to tell readers about her family, but to show them the kind of life she lives back when her country is severely divided by isms and the silly desire to self-claim what’s the best to implement. The premise is pretty brilliant, and it has a flowing plot and sarcastically hilarious tone, even when the narrator has to tell of her hard times. All the characters are vividly drawn, too, making us able to see that this is the “real” family, a family that is so naturally pretentious and secretly troubled.

Though ambiguous in some ways, The Mussel Feast by Birgit Vanderbeke is a light yet very thought-provoking story. The narrative is wearing sometimes, especially when we have to follow wherever the narrator’s recollections take us to, but it’s not boring. It’s simple and nice, and if you have time, you can finish it in one sit.

4 thoughts on “The Mussel Feast”