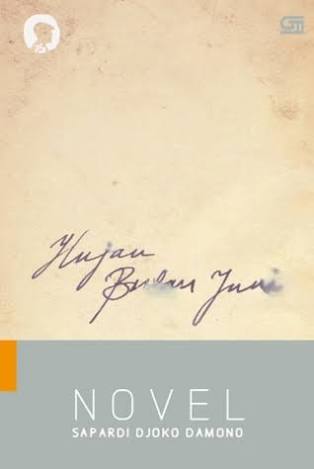 At a time when racial/religious intolerance toward others has rapidly become a daily spectacle almost everywhere, we totally need to sit down and read something thought-provoking like Hujan Bulan Juni: Novel, the prose version of a widely popular poem with the same title by one of the most famous senior Indonesian writers, Sapardi Djoko Damono. Some readers with little perception might merely find the novel a cheesy romantic love story, and failed to see the criticism of people’s common narrow-mindedness Mr. Damono throws at almost everybody in his almost every page. It’s not only about race/tribe, or religion, it’s also about our (Indonesian) deeply rooted idea: in marriage, love only will not be enough.

Pingkan and Sarwono love each other, so much so that you might be sick of them. But there are doubts, and hindrances. Sarwono is a Javanese Muslim, while Pingkan is a Christian, of Manado descent. When they don’t talk about jazz and poems they talk about their identity, which is a dangerous topic everyone should talk about in a hush, at least in this country of ours. But they are not some bigoted people who get so much as a twitch in their eyes when someone says something about their religion or tribe. They talk about it in an open, hilariously smart way that you won’t think they’re trying to offend each other. Their love is stronger than anyone’s attempt to put people into boxes labeled with their identities. Even stronger than Pingkan’s extended family’s secret evil plan to separate them and make her marry another man with the same background as her. Still, Sarwono has his doubts, not about their future but Pingkan’s faithful heart. He’s always in doubt. He’s jealous and melancholic and writing poems for newspapers just so she can read his helpless love for her. When Pingkan, a lecturer in Japanese, is sent to study in Kyoto by her department, Sarwono can’t help but feel sad and jealous of other men in Japan who might get her attention.

Hujan Bulan Juni is indeed a romantic book, mostly describing how deep Sarwono’s and Pingkan’s love for each other is and how jealous and hopelessly melancholic he can be, but that doesn’t mean it’s short of sting to shock readers and make them see. As hinted earlier, Mr. Damono uses tribal/racial and religious issues a lot as the background of the story and cannot stop rambling about them throughout the book. He even makes Sarwono a lecturer in anthropology who endlessly does research on tribal and religious conflicts in the east part of Indonesia where it’s not such an unusual thing for those kinds of conflicts to happen, and what he finds out is predictably unpleasant. Through Sarwono’s voice, Mr. Damono seems to want to say that all these conflicts are obviously so pointless. Nothing will we get from them but more and more conflicts and disintegration. Idealists always say something about keeping our unity and tolerance, but in reality, under the perfect surface, most of us still see people of different tribe, race, and religion as liyan (the word for others in Javanese), and we secretly do not want “us” and “them” to become one. And the identity problem doesn’t stop there. Pingkan, described as only half Javanese and a Christian, never thinks that she belongs to any tribe, often confused about who she really is. When other people think it’s hard to accept the unity inside the country, she feels it’s very difficult to accept the unity inside herself. Unity, it seems, is a very slippery thing.

The novel is told from a third person’s point of view, although we might occasionally sense Mr. Damono taking more of Sarwono’s side when it comes to expressing emotional thoughts, making the book sound more male and lose the balanced voice it could have had. I don’t mind, though, because I love the critical, romantic tone he sets for the story. It’s just what I’d prefer to get when reading a novel. And the humor is brilliant, too, it’s truly clever and I could really get it like it was my own joke. I don’t mean to sound boastful, but I have been for a long time suspecting that Mr. Damono and I are actually of the same mind. That’s probably the reason why I always subjectively love his works. Speaking of his works, Hujan Bulan Juni also has the same short, dense, effectively punching narrative as his other ones. It’s briefly elaborate, with five chapters only: some of them are quite long while others only go so far as one or two page. It’s safe to say that it has the economy of a short story because even though you can finish it in a blink it still has an effect on you. What I found lacking about it is the editing. Always the editing. I can never understand what it is with Mr. Damono’s books and editing. Every time I read his fiction work it’s always poorly edited—the sentences, the spellings, almost everything. And this time I had to deal with some missing sentences and paragraphs that sometimes the prose read incoherently. Other thing I found a bit depressing was its lack of focus. I have to say that Mr. Damono seems to not really know where to put his emphasis on: the racial/religious issues, or Sarwono’s acute jealousy?

Be that as it may, Hujan Bulan Juni: Novel is still a marvelous work. I will never regret making it one of my best reads this year, and also one of my favorite books ever, along with Mr. Damono’s Trilogi Soekram, of course.