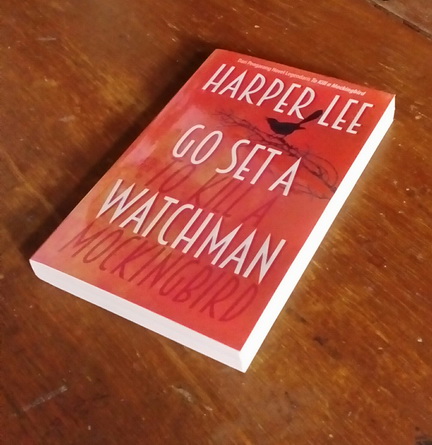 One might wonder, what was Harper Lee thinking when she started to write Go Set A Watchman? Did she intend to write a story about racial discrimination and segregation? Or a story of a man who tries to use his reason, rather than to act heroically, in the time when race is an issue capable of dividing a country into two? Whatever it was, what I’m pretty sure is that she couldn’t have been thinking to make an angel out of him when she wrote this book like the one she had in To Kill A Mockingbird, for this was the first manuscript she finished before she finally switched direction and wrote the later, phenomenal one.

The story opens with Jean Louise Finch coming home to Maycomb County to spend her two-weeks yearly vacation. The county is not only her home, it is where she spent her childhood, where her father taught her (and her brother Jem) justice and equality. Until then, her father, the well-known, heroic lawyer Atticus Finch, is her idol, her rock, her role model. Everything she knows about humanity, about what’s right and what’s wrong, she learns from Atticus. But one day, she finds an appalling pamphlet in their living room, of which content is about supporting racial segregation and discrimination, defying the idea that black people are equal to the whites. It breaks her heart to discover that the pamphlet is her father’s, and that her father and boyfriend, Henry Clinton, are together in an effort to “keep the black people in their place”. She feels betrayed, hurt, resentful. It is at this point that she realizes her father is not someone she knows anymore.

In To Kill A Mockingbird, Atticus Finch is a hero of justice and equality, defending against all odds a young black man accused of raping a white girl, whom he’s certain is not guilty of anything of the sort. But his character suddenly becomes controversial with the release of Go Set A Watchman, chided and hated. Here in the “lost manuscript”, he is described as racist and supporting segregation, believing that Negros are inferior to the white people in every aspect. There is no explanation, I think, for this huge gap between the two characterizations other than that they are two totally different persons: the Atticus Finch in To Kill A Mockingbird doesn’t hesitate to act heroically for the sake of justice, while the one we encounter in Go Set A Watchman is a man who tends to err on the side of caution and use his logic to solve the racial problems eating away his part of country as he sees fit. If we would just stop and ponder over Atticus’ argument when he has a clash with Jean Louise in his office, we will see that he actually tries to be realistic, considering Southern black people’s lack of capacity at that time for them to be granted political right to vote. So, if To Kill A Mockingbird is a body of idealism, then Go Set A Watchman is an embodiment of unpleasant reality. What makes To Kill A Mockingbird, as well as its version of Atticus Finch, long-lasting and much beloved is that people like to dream and won’t give up hope whatever happens. While the reason Go Set A Watchman, along with the cruelly realistic Atticus Finch making appearance there, becomes inevitably unpopular is that people don’t like being slapped in the face by the hand of reality.

Truth to be told, I found Go Set A Watchman a bit lacking. It’s raw and not properly worked on. Harper Lee spends 1/3 of the book just to make space for the character of Jean Louise to describe herself: her attitude and behavior, her opinion, her way of thinking, so on and so forth. Only after that comes out the real problem, what makes her relationship with her father a brittle one. Even at this point, Lee doesn’t care enough to elaborate the conflict more for the reader to understand, providing merely a quick flick into Atticus’ horrible fault and nothing else. And then, after a terrible shock on Jean Louise’s side and some more flashbacks, the plot glides fast to the final confrontation between Jean Louise and Atticus where Atticus is given only a little room to explain himself while Jean Louise has so much to pour out her anger and idealism. The road to the conclusion is even faster and unconvincing. It’s not that it doesn’t make sense, it’s just too fast to believe. What makes it still bearable is definitely the characters: they are all flawed and human.

Overall, Go Set A Watchman is an imperfect yet intriguing work. It has flaws here and there. I think To Kill A Mockingbird is so much better written than this one. However, I like the way Lee describes the racial issues in this book: it triggers our sense of humanity and yet forces us to see the issues from two different points of view.

3 thoughts on “Go Set A Watchman”