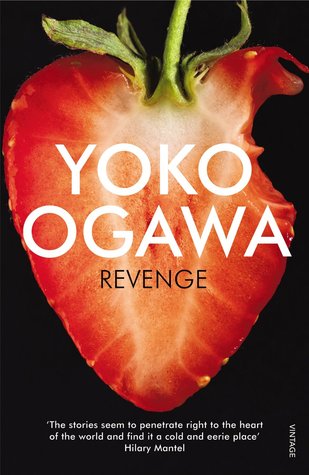 It’s odd. It rings with mystery. And it’s palpably horrific. Revenge by Yōko Ogawa does not only present to us eleven dark tales, as it is stated on the second page of the book, but also something beyond any reader’s imagination. It’s not a collection of crime stories with bloody scenes of people dying at the hands of serial killers, nor of horror ones with ghosts flying here and there. Yet it has an air of creepiness and ability to keep us holding on tight to our guts throughout every piece. If anything, Revenge is a work of literary art which explores humans’ deepest minds and darkest hearts, something that will shock readers with what people could do beyond this life.

The short story collection contains eleven pieces of writing, all of which are dark and dreadful, in every sense of the word. Their dreadfulness comes in various forms: from a mother who never forgets to buy her dead little son a strawberry short-cake every year for his birthday, to an old landlady who grows carrots looking like a man’s hand, to a young woman with a heart growing outside her body, to a strange woman who claims to be a writer and accuses other people of stealing her works but, in fact, she doesn’t seem to write anything. But those are not all. In Fruit Juice, a teenage girl, who is apparently the illegitimate daughter of a prominent politician, tries to dampen her sadness by eating kiwis stored away in an abandoned post office to her heart’s content. She is a very quiet girl that when you ask her questions she will only say a word for the answer. She’s someone who keeps everything to herself, until, one day, after she meets her biological father, she cannot take it any longer and take it out on the kiwis she finds with her friend.

Jumping to Lab Coats, story number five on the list, we will meet a normal-looking secretary working at a university hospital, who is actually the secret lover of a doctor doing a residency there. But we will no longer think she is normal once the narrative unfolds the fact that she has murdered said doctor only for breaking his promise. What makes the story even scarier, though, is that her fellow secretary, upon knowing first hand about the murder, does not think that she is a cold-hearted killer. The fellow secretary keeps holding the idea that she is lovely and nice and flawless. However, that’s not the strangest story of all, if you ask me. Poison Plants, the last piece of the contents, tells the tale of a very old woman who seems to have interest in a young boy she is giving scholarship to. It doesn’t seem odd, of course, until the boy stops seeing her again and returns all of her money. That’s when she looks like she’s losing both her mind and sense of direction, wandering to a far away field beyond her home and finding her own dead body in a refrigerator.

As character-driven as it might seem, Revenge also has each of its peculiar ideas and their elaborations in the form of horrendous plots contributing to its twistedness. Yōko Ogawa has succeeded in handling them all with great care and precision. All the three components seem to work together under Ogawa’s firm command to trick the reader’s mind into believing that the stories they produce are something usual and that the world the characters inhabit is just the ordinary one we are living in, while, at the same time, they themselves are secretly not entities coming from this very world. It is their imposing effect they leave behind which then brings this realization to the reader right after they finish each story on the list, an effect where they will finally see that those stories are impossibly odd and hair-raising. Despite being stand-alone pieces, in addition, all of the short stories in Revenge appear to be intertwined to each other, becoming so by certain elements in the narratives which are hidden away from the reader’s eyes. If you’re not careful enough or you don’t have sharp enough sense you will miss them and wonder what possibly connect the eleven tales. The trick is so clever that I would call Ogawa a true genius in creating and presenting a work of art. The pace of every plot is also steadily maintained, readers won’t feel that one particular story is too long to read even if it really is a long one. And there is not so much as a hole in every plot, either. They are all whole and neat. And the best thing about all the stories in this collection is they are not only open-ended, but also open to any interpretation. Readers can interpret them any way they like because the meanings are not clear nor determined, but vague and broad. That’s what makes Revenge not a collection of horror stories, it’s something different, it’s afloat on the sea of our imagination.

I would undoubtedly call Revenge by Yōko Ogawa a great work of fiction, almost perfect even, if only it’s not too creepy to read at night. Really. All the components are very meticulously worked on: the ideas, the writing style, the language, the atmosphere, the characterizations, the narratives, the final executions, everything. It you want to read something “out of this world”, then I suggest you to try this book.