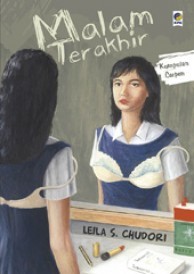 Although it’s the third book by Leila S. Chudori I read, Malam Terakhir was actually her first work ever published. I didn’t have any expectations of this one, I didn’t dare to, since I’ve read the other two and been left quite disappointed. Chudori is a talented storyteller, I can say that, but I always have a problem with her language and (judgmental) tone. And this short story collection is no exception. It’s peopled with black-and-white characters (though Chudori tries hard to make them gray), and written with language too poetic to be real. What’s worse, of all the nine pieces contained in the book, only three that quite impressed me.

The first is entitled Air Suci Sita, a story based on Hinduism-rooted Javanese wayang tale, Ramayana. Like what Sapardi Djoko Damono does in his own retelling, Dongeng Rama-Sita, which is included in his double short story collection, Pada Suatu Hari Nanti/Malam Wabah, Chudori uses the idea of said tale to alter the whole narrative. However, instead of making the main female character choose her own way the way Mr. Damono does, Chudori doesn’t change the “female faithfulness” in her own version of Sita. Her Sita doesn’t dare to, even if love and desire have invaded her entire mind and being. She shuts them all and stays faithful to her fiancé. But this is the point where Chudori cleverly shows the reader what is wrong with our gender idealism. Why is it so normal for women to be/stay faithful to their men, and for men to betray them? Through this story, Chudori seems to want to slam the society for their injustice and male chauvinism. That’s said, Chudori doesn’t let the reader think she can’t be harsh in showing where she stands.

In Keats, my second favorite story of the book where the female character imagines herself talking to John Keats, Chudori takes action and makes her turn back and pursue her true love, instead of listening to her family and fulfilling the society’s expectation. The last of my favorite stories in Malam Terakhir, Sepasang Mata Menatap Rain, does not talk about gender/women’s problem at all. Far away from that, it tells of the experience of a two-year-old girl named Rain where she comes to know the harsh reality of life for the very first time: poverty, hunger, a little girl just a bit older than her playing music on the street only to get a scrap of money. What she doesn’t see is what’s behind all those things: the beggar mafia, the cruelty of war. And it is not so easy for parents/adults to explain it to an innocent girl like her. And when they try to do it, the result is a clash between pure sympathy and political views.

As I’ve mentioned in my introduction, the characters of almost all the short stories in Malam Terakhir are portrayed black-and-white, no matter how hard Chudori tries to make them look gray through her narratives. And so sadly, Chudori seems to make two strict divisions: fathers are white, and mothers are black. What is wrong with mothers, anyway? Are mothers always that bad? I thought, as a woman herself, Chudori will champion the position of mothers. What is the point, then, of talking gloriously about gender issues if she doesn’t have any intention to make even the slightest description of a good mother? A mother doesn’t always have to be likeable, of course, for they are only human. But, at the very least, you don’t have to make them that horrible. Women have already had too many problems without being described as awful. Besides the characters, the language also doesn’t work for me. It’s too poetic and figurative to my liking. Thank God she doesn’t mix it with slang language the way she does in 9 dari Nadira and Pulang, which results in an awkward feeling during the reading. The only thing about Malam Terakhir that I can give some honest applause is the way Chudori arranges all the nine plots. They are all very neat and clean, so much so that they feel deceitful, in a good way, thankfully. Paris, Juni 1988 has the best storyline of all, no doubt about that. And it’s unique, too.

Basically, all the stories in Malam Terakhir have some really great ideas, especially Paris, Juni 1988, Air Suci Sita, Sehelai Pakaian Hitam, and Sepasang Mata Menatap Rain. Such a shame they are not manufactured in the best way they can be. Despite talking mostly about freedom, all those stories are not written in a free way that they look so stiff. I don’t think readers will feel that they can get right into their hearts, that they can move something inside them.