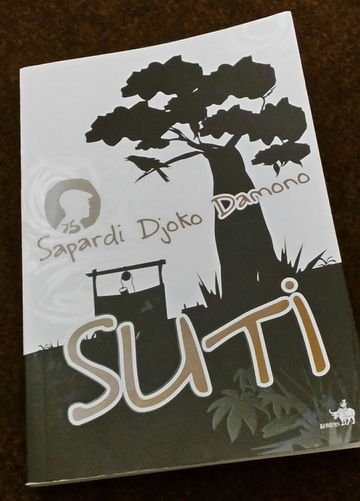 Can a woman ever choose? Can a woman ever be powerful enough to say no to the fate life has forced on them? Suti, Sapardi Djoko Damono’s recently published novel, reflects these questions and their possible answers. Set in 1960s’ Solo, the book largely describes Javanese society with all their local customs and habits, typical characters and behaviors. Nothing typical about Suti, though, as Mr. Damono has intended for all the readers to see.

Suti, a very young woman living on the outskirts of Solo, is married off by her mother to a middle-aged man with no particular permanent job just for the sake of shutting people up over her inability to find a husband. Suti is in no position to refuse. So there she is, leading an empty, unhappy married life with her husband Sarno. Nothing seems to change, until one day come the Sastros, a noble family of the lowest rank from Ngadijayan, to their village Tungkal. Suti instantly admires Mr. Sastro, the head of the family she likens to Kresna in a famous wayang story, and wins Mrs. Sastro’s maternal affection as she helps her do everyday household chores at their home. It is at this point that Suti’s life starts to change, becoming complicated and all the more so when she realizes she’s fallen in love with Kunto, Mr. and Mrs. Sastro’s elder son. She never knows, and can only guess at it, if Kunto has the same feeling as her. He never says nor does anything to show it, and his cryptic attitude toward her only leaves her muddled. After living an empty marriage without ever having any chance to feel love, now Suti has to choose between real admiration and seduction, or love she might never reach.

Mr. Damono has made it clear throughout the plot that Suti is about traditional society in the past, and it’s so marvelous of him that he creates such an unusual character like her. She is not a woman you would imagine living in the 1960s’ Solo. Being only a servant, Suti is remarkably smart and full of curiosity, daring and talkative, has no qualms about getting along with bad boys, and loves reading and watching movies. It is her who plays the key role in stirring the entire narrative, and also who eventually raises questions in our heads: Will she, a daring and intelligent woman, be able to jump out of the line of her customs and traditions and get the love she’s been craving all along? Or will she just give up and shift her aim to fulfilling her secret desire? Will she, as a daring and intelligent young woman, just stay silent without even trying to say something to the one she loves? The character of Suti, and all the stories Mr. Damono weaves around her, show us what position a woman can have in traditional society, what they can and cannot do when tied to an unhappy marriage and local customs no one dares to even think to break.

There is one more character I still cannot get out of my mind. It is none other than Mrs. Sastro. She is not just another woman, she is a woman with strength of her own. She can be strong just by being quiet and taking any challenge coming to her way, and when she is angry, she can spill it out with immense dignity. She may not be as interesting as Suti, and she may be just a typical married Javanese woman anyone would expect, but it was her willingness to go through every storm in her life that fascinated me. How many women are there in today’s society who will keep fighting in unfaithfulness and face so many trials and tribulations? Once again, Mr. Damono shows us what it feels to be a woman, especially when our society doesn’t let us be free to break the rules and customs.

The outstanding features of Mr. Damono’s fiction works—his brilliant ideas, his riveting narrative knits, his usually against-the-tide view of the world—are easily seen in Suti. His writing style is like already a trademark anyone can guess. But Suti is not a boring heap of sentences. It’s tightly plotted, steadily paced, and to the point. Everything is so neat and dense that you could say Mr. Damono doesn’t waste any space here. As for the character, I have to say I very much marveled at how real and vivid Mr. Damono is in describing all of them. They are so human, so gray. It is them who render this story alive and down-to-earth, effective and gripping without being “fantastical”. One problem, though: there are too many typos and double words that I start to suspect that the manuscript was not edited at all. Such a shame. It could have been a perfect book otherwise.

That flaw aside, I still loved Suti. It’s already the third time I read Mr. Damono’s fiction work and this book has made me love him even more. Suti is an embodiment of thought on gender and women’s issues, and it is so amazing for me to see that we have a male author who has no doubt to stand by females and show people what is wrong with our (traditional) society.