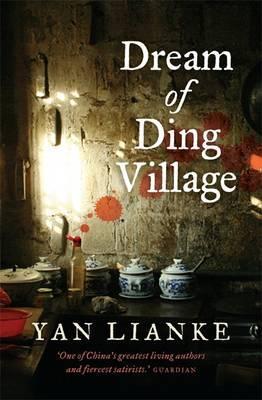 A book could serve as a satirical picture or sharp allegory, especially when it has no intention to be discreet about what it is actually picturing. Dream of Ding Village by Yan Lianke, first published in English in 2011, is this very kind of book. Being said to be a biting satire on the blood-contamination scandal in Henan, it is, oddly enough, describing mostly how capitalist mentality is gradually seeping into and gnawing away at the heart of the communist China.

Once upon a time in China, in an imaginary place called Ding Village, scandalous blood contamination spread and brought about HIV epidemic. The villagers were persuaded by the government to sell their blood for a certain amount of money, and after so much disbelieving and resisting, they agreed to do as they’re told. But that was not the end of it, as procedural malpractice done by the blood merchants shadowed the running of the blood trade. More often than not, those tricky merchants—including Ding Hui, the eldest son of the village’s substitute teacher Ding Shuiyang—would use the same needles and cotton wipes for several times and drew blood more than they should in exchange for a lesser amount of money supposed to be given, leaving the villagers with an incurable fever no one knew the remedy. Through this “dirty business”, Ding Hui got rich and could afford to build a new, bigger house than those the average villagers had. That, along with the fever, triggered envy, grudge and hatred in the heart of people of Ding Village. And so, someone among them killed his little son Ding Qiang, and it was from the point of view of this boy’s ghost that the entire story unfolded: the villagers’ move to the village school to spend the rest of their lives, their forbidden love affair, their act of stealing things, and the takeover of the school by Jia Genzhu and Ding Yuejin, those who hate Ding Hui most.

I don’t think Dream of Ding Village talks about the blood-contamination scandal happened in Henan, China, as it is described throughout the book. I believe it’s more about the moral vacuum that comes along with capitalist mentality piercing through the country. It is clearly reflected in the character of Ding Hui, the one set to be the antagonist of the story, in the way he tricks the villagers for money, in his belief that money is everything and can buy everything (including honor and dignity), and in the current conditions of big cities in that communist country—cities which have been more modern, richer, and more sophisticated. But the capitalist value sharply projected by all these features doesn’t immediately kill off the true communist character of China, of its people and government. The equal amount of food supplies for all the sick villagers and the same coffins for all the dead villagers from the government are examples of how communism still stands firmly there in spite of the rampant economic development brought by capitalism. This makes China, as described in the book, a country of stark contrast.

What made me so lost during my reading was the reason those villagers had to sell their blood. Frankly speaking, I never heard of the scandal and the book offers no explanation of why Chinese government seems so insistent that the villagers of Henan province should sell their blood. I couldn’t get deep into the story and understand the core of the issue. This book seems only to try to criticize the government’s decision to trade its people’s blood and the aftermath of the dirty business, nothing else. The narrative doesn’t help, either. It holds no appeal it needs to catch the reader’s attention amidst all the sharp criticism and satire, leaving them bored going around and around in an inconsistent pace and weak structure. It has also to be interrupted by a not-so-important forbidden-love story, which is, ironically, more interesting than what the writer intends to put forward. What’s worse, the entire story is told from a twelve-year-old child’s point of view. I know a boy at that age is not that innocent (he might have known about sex and all), but I don’t think he’s already that mature to know or understand adults’ way of thinking, their evil minds, their schemes, their hatred, their anger as he is not supposed to only serve as an observer, but also a narrator who tells the tale, who understands all the details. The only good thing about this book is its ending—it’s shocking, it’s unbelievable, and yet it surprisingly feels right.

In conclusion, Dream of Ding Village by Yan Lianke just didn’t work for me. I might have liked it if it gave me even a little explanation of the issue, or provided me with a captivating narrative that could make me forget about the issue.

1 thought on “Dream of Ding Village”