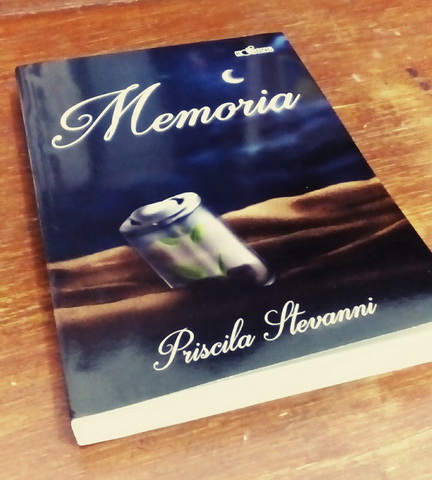 I wouldn’t call it a very detailed work of science fiction, though there is more than a hint of imagined scientific discoveries of the future (the time machine, robots, etc) and time travel (back and forth between the year 2015 and 2097). Freshly published toward the end of 2015, Memoria by Priscila Stevanni is a young adult novel coming up with a romantic, scientific story with young characters poised to save the future world. It is just such a shame, in my opinion, that such a pretty good idea (at least for the market standard) doesn’t develop in thorough, elaborate narrative.

The story begins with an introduction to the main character, Maira, along with her odd experience of travelling across time and space. Then the plot brings us to her “normal” life where she is only an ordinary school girl with typically two best friends, Nadin and the boy next door, Rega. Rega is not just a best friend, though, if she is to be honest to herself, for he’s the kind of boy-friend who is always by her side and willing to do anything for her and thus means everything to her. It is so unfortunate that she keeps her feelings to herself and doesn’t have the courage to tell him about it. She might regret it later at her birthday night when a white van seems to deliberately hit their car and, strangely and suddenly, Rega vanishes without trace. More strangely, it is not only his physicality and presence that are gone, people’s memories of him are also erased from their minds. No one but Maira remembers him, and when she keeps trying to remind them of him, they think she’s going crazy. This spiel seems to be going around and around until one day, it is Maira’s turn to go vanished, jumping far away to the future where Rega has apparently been for all this time. There, in the destroyed land of the future Earth, Maira gradually starts to know her true self, and sees the evidence of severe damage done by humans in the past.

You couldn’t expect anything special from the characterizations in Memoria. The book merely presents typical high school kids you’d see in your everyday life: restless, indecisive, secretly in love or openly changing lovers. Even the main character, Maira, doesn’t catch my special attention, despite her development along the storyline in which she changes from a spoiled, dependent teenage girl into an independent, tough survivor. Rega, her supposed best friend, can even only project the serious, champion-in-everything boy first formulated years ago when teen lit started to invade our bookstores. Thankfully, however, this ordinariness goes only so far, until they are thrown to the future and meet Toya, the most charming character of all. He might not have as much portion as Rega or Maira, but he proves to be the star attraction to me. Fortunately, Toya is not the only good thing about Memoria, for it has a quite promising premise. The thing about this book is it’s not elaborate enough. The narrative lacks explanation of why things happen (though it provides a little at the end of the story), and the detailed descriptions of everything “scientific”. The time machine, the supposedly sophisticated computers and the robots are not well described, reducing the “scientific atmosphere” you need in a work of science fiction. What’s more, the tight plot doesn’t seem to make room for a specific conflict to exist. In fiction writing, to my thinking, a clear conflict is the key. You cannot drone on and on about a situation and then suddenly, at the end of it, just saying, “We did this because you are what you are.” Fighting and running from the evil side are barely a conflict, if that’s what you think. You need to elaborate, to describe more. No wonder this book is so short.

Well, despite my disappointment on its narrative and scientific aspect, Memoria is generally a pretty good novel. I enjoyed it. The plot is nicely flowing and skilfully paced, although too short to explain anything. The writing style is nice as well, for a young-readers-targeted book like this. It’s heavily sprinkled with English here and there, but I don’t really mind because it’s still under the right dose for an Indonesian book. The way Stevanni tells the tale is also quite excellent for a new young writer trying to compete in our today’s cramped book industry. Her storytelling is mature, reliable and very well-organized, something that I rarely see even in writers more senior than her. Her only problem is that her language is too much like that of translated books, which I assume is resulted from her reading materials (perhaps imported or translated romance or YA sci-fi novels). She often adapts a word literally from English without trying to find out what’s the word in Indonesian. The spelling is also a mess, though thankfully it doesn’t affect the grammar.

Overall, I can say that Priscila Stevanni’s Memoria is a not-bad YA sci-fi book. You cannot expect more from it, but it really is an enjoyable read.