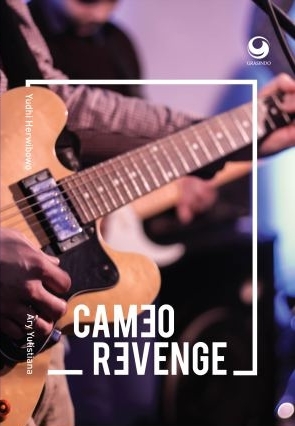 Cameo, Revenge is a two-stories-become-one musical novel by two Indonesian writers, Yudhi Herwibowo and Ary Yulistiana. To be honest, I was totally unfamiliar with their works until Herwibowo kindly gave me this book as a review copy. As far as I know, Herwibowo is best known for his historical fiction works, so I didn’t know till today that he would write something more commercially popular like this. But I went into it without a hint of cynicism, though with so much caution as to what I would discover, and turned out quite amazed by it.

The two stories are connected by the occasion in which the two bands whose members are the main characters of both titles compete in their town’s music competition to get some cash. In the title Cameo, Yudhi Herwibowo brings out the story of a rock band formed spontaneously to enter the said music festival. They have all they need to be the champion: great talent, musicality, a good song, a convincing performance. It is no wonder then that they really win it. But that’s not the end of it. As they rise to fame, the media start to put them on the front page and dig deep into their private lives. Having their dirty pasts out in the open seems to be what any celebrity is afraid of, especially when they’re at the peak of their career and everybody is looking at them. That’s no different with Cameo. Their quick fame starts to take its toll on them, breaking their group into pieces. Unfortunately, this break-up doesn’t seem picky in getting victims. Their competitor Revenge, also the title of the second story, have to suffer the same condition but for a completely different reason. Their being the runner-up has flared up anger inside the heart of the vocalist. Her hunger for fame and a bigger, full-album deal totally blinds her to the core. Thinking that the other members of her band do not want the same thing as she does, she then dumps them out one by one, even through the meanest way imaginable, and joins in another band formed by the most evil manager/producer in the music industry.

All characters filling the book from page one to the last are not heroes without sins nor wrongdoings—if you’d just forget the saying “to err is human”. They are all opportunist, selfish, ambitious, and neglectful of others. These characterizations, which, I believe, are purposefully shaped by the authors to set and show their narrative goal, are quite well described and very neatly elaborated through their own voices in each character-dedicated chapter. The hindrance of their nature being thoroughly explored is that some of them do not get the same portion, or should I say the same length of chapter they need to be so. But the writers have pretty been successful in giving voices to those complex characters so that they can be reliable, trustworthy narrators of the stories and get the hidden moral out of the lines. What baffles me, though, is that Herwibowo sounds so feminine even when he “narrates” the male characters. On the other hands, Yulistiana sounds very male at her every male characterization in the story Revenge. Maybe I shouldn’t be bothered about the “gender” of the characters’ voices produced by the writers, or maybe I should think that narratives should be gender-free, but I always have this opinion that a writer should be able to produce exactly, correctly, the voices of the their characters, male of female.

Cameo, Revenge have actually an interesting basic idea and their plots are quite nicely woven together. Such a shame that the writers, both Herwibowo and Yulistiana, do not deliver their stories in a way that I could call “naturally flowing”. In Cameo, Herwibowo doesn’t seem to know how to formulate a “youngsters’ language” to use in a novel like this. His dialogues are too formal and stiff that they feel unnatural and awkward, even poetic sometimes. Be that as it may, his style of storytelling is pretty good. He can keep some mysteries at the beginning to eventually be put out at the climax, which is quite attention-gripping. Conversely, Yulistiana has a more sophisticated writing style in delivering her story the right way. Her dialogues are natural, not over the top, and safe from unnecessary poetic tone. It’s just a shame that the plot she sets up is not that extraordinary: lacks of surprises, too straight forward and simple. At the end of Revenge, it only feels like it ends the way it should and nothing else.

Overall, Cameo, Revenge is a not-bad package of two stories. Whatever the weaknesses it has, it’s still a fun read, especially for young readers. The packaging is even very attractive, with an elegant cover to match the idea.