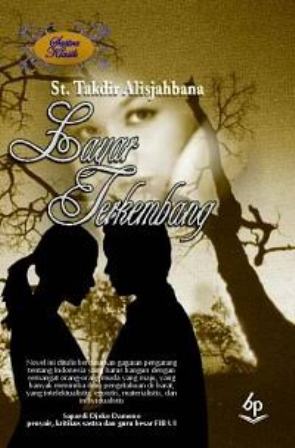 In 1936’s Indonesia was barely on the verge of its independence, but the pressure for gender equality seemed greater and greater. Through Layar Terkembang, Sutan Takdir Alisjahbana appears to imply that the urge to embrace modernity, in every aspect possible, couldn’t be held back anymore. Told in a form of short novel, the thought-provoking story of this classic Indonesian work unfolds what it was like in the past when an independent woman fighting for a place in society had to war with her own desire for love that demanded her letting go of her stand and cause.

The book opens with two young women visiting an aquarium one morning and encountering an attractive young man by the name of Yusuf. The two sisters catch his attention instantly, but it is Maria, the younger one, who sweeps him off his feet for her sheer beauty and easy manner. It’s not that he doesn’t find Tuti, Maria’s older sister, attractive, but she is made of sterner stuff and more difficult to please that Yusuf can only admire her as a smart woman and nothing more. Tuti herself is not a woman to fall for a man so easily and chooses to stay single in order to focus on fighting for her cause: gender equality for the local women of a country which is still a Dutch colony. Over the times, though, as Maria and Yusuf forge a strong bond of love and affection, Tuti starts to feel jealous and lonely, missing and desiring for something Maria has and she doesn’t. She even almost—almost—accepts her fellow teacher’s proposal just so she can fill her empty heart and know what it is like to have someone who loves her. But she finally declines it for she knows that she can’t marry without love and that she can’t be with someone who is not equal to her in everything. However, at the end Alisjahbana shows us that even a woman as strong and stubborn as she is cannot fight the destiny, especially when Maria is dying and asking her to fulfill her last wish.

Tuti and Maria are poles apart, there are stark differences between them. While Maria is prettier, weaker, easier to love and dependent, Tuti is stronger, stubborn, tenacious, self-reliant and has no qualms about saying what she thinks is right and coming up with harsh comments on everything. Between the two there is Yusuf, a young man with an open mind and love for nature. He is a man who has respect for women and can appreciate women’s intelligence and thoughts, but he is also an average man who chooses beauty over brain. His character is a bit disappointing and too much confusing, especially when he, conscious or not, can fully understand how Tuti sees things and thus defends her opinions everytime there is a chance. Perhaps, to my thinking, Alisjahbana describes him in that particular way not only to show how men generally see women, but also to state that between two different qualities women can have, a man can turn to a path more worthwhile.

Layar Terkembang is not a tale of a love triangle, precisely, it is about women and how a relationship between a man and a woman should be. The writer wants to show that even in 1936 when Indonesia was still a Dutch colony, the more developed a nation or society, the bigger the demand that women got equal rights to men in many if not everything. Women also, as represented by the character of Tuti, demand that a marriage should not anymore be an institution where women have to give up everything and only say yes to anything arranged for them, but rather a relationship where two people love each other and realize each of their rights and responsibilities and have equal positions. This book is a subtle embodiment of the urgent need for modernity wrapped up in the urgent demand for gender equality in a country that was still crawling towards independence. Quite unfortunately, however, this grand idea is not elaborated in a detailed plot. Short and compact, Layar Terkembang really doesn’t have an adequate storyline. So short is it that it feels as if the events hop from one scene to another without further explanation, and some readers may think the narrative has an irrational time structure. What helps the book to engage the reader other than its feminist message is definitely its characterization. The three of them, Tuti, Maria, and Yusuf are very well drawn, vivid and strong and drawing sympathy no matter what they do and how they behave.

Layar Terkembang by Sutan Takdir Alisjahbana would have been a completely perfect novel had it not lacked the narrative elaboration a reader might have expected. Nevertheless, I think this book is still worth reading and being labeled as one of the classic works to remember. It’s something we would call an eye-opener.