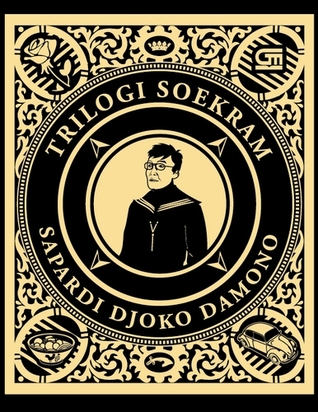 Trilogi Soekram is a collection of novellas by Sapardi Djoko Damono, a senior Indonesian poet, essayist, and fiction writer. First published as one in 2015, it contains three separate, unrelated stories which only appear to read in continuity like a series, barely connected by the main character. Surprisingly, when read as one, they become an engrossing, compelling unity.

In the first story, Pengarang Telah Mati (which was first published in 2001), the reader immediately meets the main character himself, Soekram, who addresses them directly from the page he is written and lives. He complains about his current situation in which he is left hanging with no certainty over his fate after the death of his creator. The unnamed writer, who’s supposed to finish the story of Soekram, dies and leaves his last work in separate files in his computer. Anxious and upset about the run and ending of his story, Soekram then “jumps” out of the page and meets the writer’s friend, asking said friend to find those files and edit the contents so that his story can be finished the way he wants it to be. However, when readers come to the beginning of Pengarang Belum Mati (first appeared in 2011), it turns out that the writer is still alive. In a way so much like Soekram, his invented character, the writer complains about people thinking him dead already, and the way Soekram spreads the false news to everyone and manipulates the run and ending of his story. He comes to his friend and asks him to publish the finished book of his version. The friend’s so astounded that he cannot think of anything to say but that he is sure the writer has died. At first he is reluctant to do what the writer tells him to, but then he sees an opportunity in publishing two different versions of a story at almost the same time. The last number, Pengarang Tak Pernah Mati, seems so disconnected from the other two. Soekram, now “the master of his own destiny”, creates a story of his own where he lives with his “fellow characters”. The story he relates strays so far away from the core idea and involves figures well-known to Indonesian readers, both factual and fictional. The funny thing is, those figures start to do and behave uncontrollably on their own, leaving Soekram reeling and confused over what has happened to his story despite the fact that he is the one writing it.

As a whole, Trilogi Soekram implies the fundamental relationship between a writer and their work, the question about the eternity of a writer and the long-lastingness of their work. Which one will exist longer than life? Is it the writer whose name will never cease even when their physiques are deceased and gone, or is it their work of which pages will always be printed, read, and living in readers’ shelves and minds? As I read through the pages, the question of who controls the entire writing process also emerged. The efforts Soekram makes to gain control of his story and the way he tells his own story by going back to the past, where he lets his “fellow characters” do as they please and sometimes get him reeling at his own plot, show the reader the true core of writing: that a writer’s imaginations cannot be controlled nor limited, and that what’s important in writing is to let the story go with the flow.

The thing that’s very intriguing about Soekram is that he is not an apolitical character, even if he seems so. Instead, he is described siding with nationalism. Nevertheless, it is the point where he is perilously questioning his participation and his own ideas: is he really with those nationalists, or does he only believe what his father tells him to believe? In Pengarang Telah Mati, Soekram even questions the 1998 reformation movement and the violent way the young generation took at that time to take down the then-current government, instead of glorifying them. He also questions democracy, the implementation of foreign ideologies in our country, religions, God, and ethnicity. His mind can’t never seem to sit still and idle, and he never seems to be sure about anything. He can’t even force himself to be attached to anything or anyone, and that’s why he’s also described as unfaithful to his wife, or any woman he is with, for that matter.

I found Trilogi Soekram a unique unity, very close to rare. Readers do not have to read it or even think of it as a trilogy, but I’m sure the connection drawn by the character of Soekram is enough to make it one. The writing is exceptional, too. Every line has a poetic quality to it, making us feel as if we’re reading poems in narration. The prose style is one that will make readers gasp in awe: at first it feels just real, but then it strongly feels surreal. I immensely enjoyed the book, despite the annoying, overwhelming use of the suffix “-nya” and the word “itu” in every sentence, which often disrupted my reading. Trilogi Soekram is truly a beautiful book, almost everything about it is stunning.