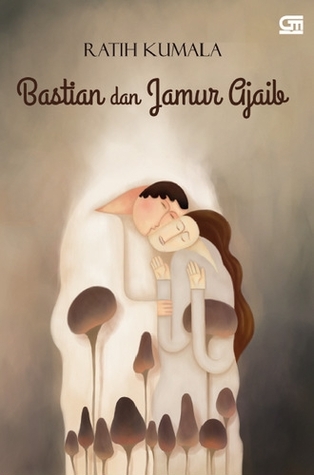 Despite having heard her name in Indonesian literary world for quite long, I never read any of Ratih Kumala’s works until just recently. Bastian dan Jamur Ajaib is not her first book, but it was the first ever that dropped into my lap. Freshly published in 2015, it is a collection of thirteen short stories with truly brilliant ideas, although the writing of some of them mostly does not support the shiny premises. Here are a few which I deem to have left the strongest impression in my mind.

Well, it needed a willingness to move through two somewhat badly written stories before I finally came to a number which has both a unique premise and an acceptable way of storytelling. Nenek Hijau, the third story on the list, presents to the reader a notion of virginity apposite to what society believes in general. While people hold a firm belief that women have to keep themselves virgin until the day they’re married, in Nenek Hijau Kumala tries to play with that notion and reverse the whole discourse. As the story unfolds, readers will get to see boys who have to struggle to keep their virginity so that girls will come and ask their parents for their hands in marriage. Yet it is so impossible for them to keep virgin, because once they come of age, Nenek Hijau will come to them, unexpectedly and uninvitedly, and rip them off their virginity. The result of this is way beyond our imagination. The number entitled Tulah is so stunning, not for its storyline but for Kumala’s bravery, or rather audacity, to retell the story of Moses with a plot of her own. The story is told from two changing points of view: Moses and the Red Sea. Kumala uses quite lyrical sentences to elaborate the narrative, which match the tone she has set and thus render a somewhat epic tale.

Some other stories put unfaithfulness on the spotlight and Keretamu Tak Berhenti Lama is one of them. Here in the number eight on the list, unfaithfulness is mingled with social issues, revealing the story of a woman of middle-lower class struggling for money every single day while her becak-driver husband spends it for gambling. Women who carelessly leave their husbands and/or families are often being looked down on by the society. But here, Kumala seems to want to make a statement that if a woman is not happy with her man, then there must be something wrong with him. The other two numbers about unfaithfulness are Rumah Duka and Foto Ibu. Rumah Duka is all about the clash of egos between two women, where a wife has to live with the fact that her husband is unfaithful and has been having an affair with another woman for years, and then has to face that woman on the last day her husband breathes the air. On the other hand, in Foto Ibu the wife knows nothing about her husband’s secret lover until she learns that their settled, peaceful life is not without obstacle.

The story of Bau Laut is the most engrossing of all. Its folkloric style really supports the premise and the atmosphere is so dreamy that the reader may feel like they’re dragged into a wonderland. To top it all, the absurdity shrouding it enhances the fairy tale infusion. It’s about Mencar, a young boy living in a seaside village, who has an incredible talent of spotting the fish whereabouts under the sea and goes to sea regularly with the rest of the seafarers in said village. Despite his promise to marry his girlfriend just before his last voyage, Mencar comes back with a married status, to a mermaid. More than that, his talent seems to get greater than anyone can imagine: he can see where the fish are without going out to the sea. But then he chooses to leave the life of prosperity and come back to his true love, breaking his promise in reverse to the mermaid. What people, and his girlfriend, don’t know is that it takes great consequences for him to do that.

When I first turned the first page of the book, which brought me to the story entitled Ode untuk Jangkrik, I strangely felt like I stumbled upon a writing of a little child. This is by no means meant to offend or something, but I honestly was uncomfortable with the awkward, childish writing style. I thought that as an experienced writer who has been wandering around the realm of literature for so long, and even nominated for Khatulistiwa Literary Award, Ratih Kumala would have been better than that. The way she arranges her sentences in that first title on the list is like a little child managing to complete their very first story for the first time. Later on, although her writing and narrative form got way better, I still found some odd diction. She doesn’t seem to know what the meaning of “seraya” in KBBI (our national dictionary of Indonesian language) is, and when to use “sehelai/selembar” instead of “sebuah”. I may be wrong, and we may have different opinions on our own language, but it certainly is disturbing.

On the whole, Bastian dan Jamur Ajaib is a nice short story collection with really fabulous ideas, it’s just such a shame that not all of those ideas are realized in fabulous narrative writing.