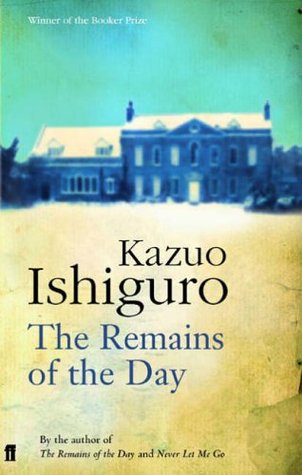 I first discovered Kazuo Ishiguro when I stumbled upon Never Let Me Go and was spurred to read it. The surreal, dystopian novel was the only work of Ishiguro I’ve read, and I never thought it was really my thing. In fact, I didn’t think I would read any works by him again, ever. But that was until I got to read several reviews on The Remains of the Day. I got intrigued, and was determined then and there to hunt the book. First published in 1989, The Remains of the Day was a Man Booker Prize winner of the same year, and, despite the simply written narrative, what it brings out from within assured me in some ways that it deserved the award.

Stevens, a butler at Darlington Hall, is going on a long journey to the West Country after accepting an offer to have some vacation from the present owner of the noble house. At first Stevens feels reluctant and doubtful about his new employer’s invitation, but then arrives a letter from Miss Kenton, a former housekeeper at Darlington Hall with whom he’s worked about 20 or so years ago, so he eventually changes his mind. On the road to Little Compton, he is swept by a wave of nostalgic memories, ones of his much younger time when he’s served Lord Darlington, the original owner of Darlington Hall, and when all eyes are on Germany. It is the time when he’s performed his duties at best, had his loyalty to his lordship more than anything, and when he’s witnessed the turmoil of the European politics with quietness of a very devoted butler. His devotion is not limited only to his services, but beyond that. He seems to defend his employer’s opinions on everything, however wrong they might be, and unaware of his lordship’s political mistakes.

Throughout the story, we can see that Stevens is described as rigid, work-minded, loyal, devoted, insensitive, and rather unwilling to enjoy his life. He portrays himself as having this particular thing he calls “dignity”, something that every gentleman has to have. Most of the time he is so frustrating that the reader might want to scream at him, knocking some sense into him that life is not only about work and professional attitude. However, as much as Stevens’s personality is quite annoyingly gripping, at some point I found my attention drifted to that of Lord Darlington. He is one of those old-fashioned English lords, questioning the essence and practicality of democracy that the common people hail.

“If your house is on fire, you don’t call the staff into the drawing room and discuss the best method of escape for an hour, do you?”

That quote above might seem so silly for some people/readers, serving only as a defense of aristocracy and feudalism and dictatorship, but I see it differently. It is true that Lord Darlington’s ideas and doubts on democracy won’t certainly be relevant anywhere, especially in today’s world that demands absolute freedom of everything. But I imagine there must be some situations in which “strong leadership”, as Lord Darlington puts it, is urgently, totally needed. How can you listen to so many people with different ideas while you’re in such chaotic situations?

The entire narrative of The Remains of the Day seems to me to be pretty simple and bear nothing of extraordinary nor unusual. With its series of flashbacks, the plot runs very smoothly without so much as a bump and is very enjoyable to follow. Even the subtle conflicts (of dignity and politics) did not trigger off much tension in me while reading it. Perhaps it’s the way Ishiguro’s writing that drowned me without me even realizing it, or maybe it was just me. The story is told from Stevens’s point of view, which lets us know what’s inside his head and how he perceives everything. Uniquely, it is from this viewpoint of his that the reader can see what Stevens himself cannot: Miss Kenton’s feelings for him and Doctor Carlisle’s prejudice against him. Only at that failure, instead of the political turmoil, could I feel the most blazing of a fire of the whole storyline and wake up from my slumber of smooth reading. Be that as it may, I think it’s the political views and English gentlemen’s character entangling with said views which are the true core of the story. The portrayal of Stevens and his lord employer elaborates the stance on democracy and Germany and shows how it then brings his lordship to the fall of his politics and aristocracy. More or less, in general, this story seems to want to criticize and blame old-fashionedness for the English weak and brittle position in war. On the other hand, it also shows that there is still tomorrow and that there’s always a chance to change direction into something or someone better, at least that’s what Stevens implies.

Finally, I have to say that I quite liked The Remains of the Day. It is a very simple read yet subtly provokes so much thought, although not so much tension and excitement. I can only say that it is a grand story in its own way.

5 thoughts on “The Remains of the Day”