It’s been a very 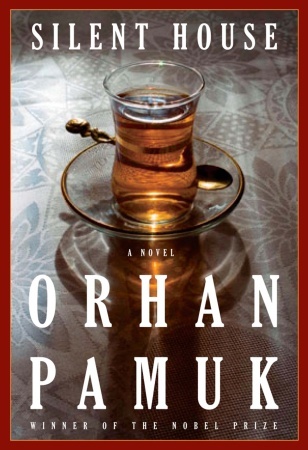 long time since I read Orhan Pamuk, and the last time only left me a bitter memory of deep disappointment. I went into Silent House, the 2012 English translation of the Nobel laureate’s 1983 Sessiz Ev, with a feeling of cautiousness, bracing myself for another dull narrative I’ve had to bear in The Museum of Innocence. It seemed likely that I would experience the same thing, especially after several first pages, until finally the long, winding road took me to the ideological conflict banging loudly from behind the silent lines.

As anyone might expect, Pamuk brings out the recurring theme that always swirls in his every novel: the tug of war between the East and the West, traditions and modernity, Islam and secularism. A bit to my surprise, the issues of communism, anti-communism and nationalism also emerge from this book. All those clashes of isms are told so subtly through the silence of a family of which members hold different ideas, also in the occasional interaction between said family and the outsiders forming their neighborhood. Fatma, a ninety-year-old woman, lives alone in her old, almost crumbling house in Cennethisar with a dwarf of a servant, Recep, who is actually the bastard son of her dead husband Selâhattin. In the summer, as usual, her three orphaned grandchildren come to spend some time of the holidays. However, instead of taking care of and accompanying their grandmother through the days, they’re busy doing their own business: Faruk struggling to accomplish his history project, Nilgün swimming and reading communist newspapers, and Metin having fun with his upper-class, “society” friends. All these daily repetitions continue to weave the narrative the whole time while a gang of extreme nationalists lurking among them, represented mainly by Hasan, Recep’s nephew. It is this young, zealous, big-dreaming boy who stirs the storyline with his enthusiasm for nationalism and his love, tragically, for the leftist Nilgün. Being in a right-wing extremist gang, who are determined to spread their political ideas by writing slogans on the walls, Hasan can’t help but feel conflicted. And so, in the throes of confusion over his stance and of his unrequited love, he unconsciously does what the reader might, or might not, expect him to do.

Much like in My Name is Red, here Pamuk elaborates each of his characters’ viewpoints through a certain chapter, where those characters tell the story the way they see their lives. So unfortunately, the character of Selâhattin, who represents the ideas of Westernization and secularism, and Nilgün, who represents communism, do not get the same treatment as the others do. While Selâhattin appears only in the vivid memories of the old Fatma, Nilgün is merely told in bits from Recep’s and, mostly, Hasan’s points of view. On the other hand, as much as Recep, Faruk, Metin, and Hasan might be drawing much of the reader’s attention with their stream of consciousness, it is Fatma whom I think of as the central character of the book. She is portrayed so silent and introvert throughout the story, so traditional, so afraid of God and the threat of sins, so unwilling to say so much as a word, much less fight the horrible things she despises. And yet, at some point, she can be so narrow-minded and cruel, so unforgiving. In some ways, I saw her as a representation of the centuries-old Turkey as a whole, the one that I know Pamuk always perceives in his mind, and channels through his stories. The silent conflict between the religious, conservative Fatma and her secular husband who messes up religious teaching in the name of modernity and development of his country behind the closed door of their inharmonious marriage more or less depicts the tug of war which has been wrecking for years and years the seemingly quiet yet continuously rioting nation.

Readers of Orhan Pamuk must have known, I believe, that scrutinizing his long-plotted, winding narratives needs patience and willingness to read on no matter how unbelievably tiring they might be. Devouring this one is no exception. It is not for a complicated, nonsensical storyline just as the case with The Museum of Innocence, though, because Silent House has a surprisingly simple one, but for the elaborateness of all thoughts and behaviors and actions of the characters in each chapter. Through all these can readers see the whole picture of what is being told, and Pamuk has expertly accomplished the mission of delivering it to us. The main tools of this story to unfold itself to the reader are obviously the thoughts and memories narrated by the main characters, and although the annoying unquoted past-time dialogues got in my way of enjoying every each one of them, I still think this kind of storytelling is quite riveting. The most appealing about this book, however, are the slow-burning climax, which is so emotionally grueling and obnoxious at some point, and the way Pamuk puts the entire story to an end, which is a bit shocking and cliffhanging. The translation is also well done, thanks to Robert Finn, it helped me tackle the general difficulty in reading this book.

Overall, Silent House is so much more satisfying than the latest Orhan Pamuk’s work I’ve read. Despite some flaws, it lives up to my expectation and more. It has a great idea, a tiring yet beguiling narrative, strong characterizations, also a proper ending. It’s just mesmerizing the way it is.