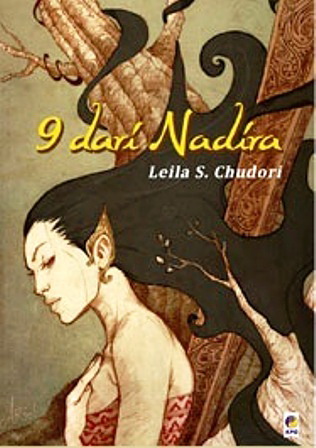 It was the second time I read Leila S. Chudori’s work, after Pulang, and the second time I felt quite disappointed with her narrative tone. First published in 2009, 9 dari Nadira is a short story collection meant to read like a novel. The contents were written at different periods of time, and some of them had been subjected to revisions in order, I assume, to synchronize them with the entire plot. They are all great stories, and I marvel at their capability to have dragged me along the book without even blinking and held me hostage to the last page. If only Chudori weren’t too judgmental.

All the nine stories are intertwined with each other and tell of one main idea, focusing on one figure, Nadira Suwandi, a journalist born and raised in a troubled, tortured family. Through each title we will see the course of her life in a particular order: the death of her mother (Mencari Seikat Seruni); the hatred her older sister Nina has for her and their inharmonious relationship (Nina dan Nadira); the familial responsibility she has to shoulder on her own (Melukis Langit); married to the wrong man and unaware of it (Ciuman Terpanjang); filing for divorce (Kirana); and finally realizing her true love when it’s almost too late (At Pedder Bay). But my favorite is definitely Tasbih, in which Chudori elaborates on Nadira’s character through an encounter with a psychopathic psychiatrist, a serial killer she has to interview for her crime report. Just a few seconds after they sit face to face in the prison, Mr. X, the psychopath, can figure her out completely. He can even guess what happens in her family, how her mother dies and why, and what her relationship with her sister is like. It sort of freaks her out and rises her temper, and I guess the reader would feel the same. But to me that is the most engrossing moment, the best story of all nine, because Chudori somehow shows us not only that Mr. X can understand Nadira, but that they are in the same state of mind.

And that is what I love most about Leila S. Chudori, the way she describes her characters. She seems to excel in opening up layers of a person and making them appear so normal albeit a little bit unsettling. Among so many characters in this collection, I think Nadira and Nina are the most intriguing ones. Nadira is described as a smart woman, a bookworm, so introvert and full of grief and sadness. Everything about her is told in great detail: her complex nature, her mourning, what’s inside her heart, her choice of life, and her saddening psychological condition. Chudori doesn’t put it word by word, but everything is there. Chudori lays her character bare throughout all the nine related stories for all the readers to see. The same applied to Nina. Despite her brief appearance in a few titles, Nina’s character is so vivid that we can see clearly her anger, her jealousy and her bitterness alongside her sense of responsibility and burden. Readers may find her so hateful, but I can understand her conflict inside. It might be hard to be Nadira, but being Nina is even harder.

Unfortunately, while Chudori succeeds in putting her created characters into the “gray area”, she doesn’t seem to feel it’s necessary to do the same with her tone, which tends to be judgmental. It’s like all people involved in the New Order are bad guys, all rich people are corrupt, all members of Indonesian Communist Party are innocents, and all journalists are angels. All of a sudden the narratives become a set of fairy tales for kids where all we get is merely black vs white, good vs bad, and all people are classified and put into boxes that, consciously or not, she creates a certain stereotype in the eye of the reader. The second most disturbing flaw I found in this book, much like in the novel Pulang, was the grammar. Chudori mixes both slang and formal/poetic language that sometimes the reader will find an inappropriate word in an inopportune sentence and the whole writing reads so awkwardly. Be that as it may, this book is not without some pluses. All the stories might have been written randomly (looking at the date put at the end of every piece), but the plot is nicely put and arranged, allowing the reader to enjoy it without being periodically misguided. And all the narratives, or rather the entire narrative is surprisingly strong, absorbing and quite sensible (though I believe there is a miss within one story). What I found so interesting about 9 dari Nadira was its main ideas: trauma, emotional wound, unrequited love, and a very, very exhaustingly complicated romance and family conflict.

Overall, I can say that I liked 9 dari Nadira. It’s just I had a problem with the tone, and I couldn’t stop myself from frowning at the sentences the whole time I was reading it. It’s great, but with great minuses, too.