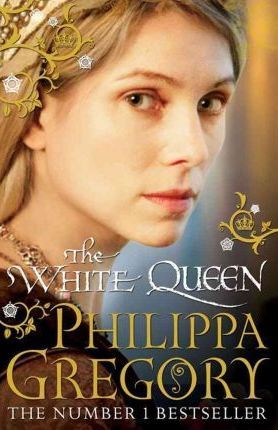 Beauty can be a double-edge weapon, as being implied in Philippa Gregory’s The White Queen, the first in The Cousins’ War series. It is as much about wars between kinsmen over the throne of England as it is about the invisible power of women which is embodied in the figure of Elizabeth Woodville, or Lady Elizabeth Grey, who later becomes the Queen of England. Disliked for her status and alleged witchcraft, the former widow has to witness endless bloodshed King Edward IV goes through to save his crown, and keep her position and family safe from those who want to see her fall.

At the beginning of the book, Gregory brings the reader directly to the year 1464, when the war between the House of York and the House of Lancaster ends with Yorkists being the winning side, despite the still ongoing fights against the usurper king, Edward IV. As a true Lancastrian, Elizabeth Woodville would never think of the new ruler as anything but her enemy, and the son of her enemy, but her widowhood and the loss of her dowry lands force her to ask for his help to guarantee her sons’ future and inheritance. Enchanted by her charms, King Edward grants Elizabeth her request and, predictably so, seduces her into becoming his mistress. But Elizabeth would not sell herself so short, and determines that the only way for them to be together is by marriage. So they marry in hasty, in secret with only a few people witnessing the ceremony. Edward has allegedly secret marriages with several women and bears legitimate children, but it is his marriage with Elizabeth that he officially declares to the public and brings to court, a marriage that sparks anger and rebellion from both his most trusted man, Warwick the Kingmaker, and his own younger brother, George of Clarence. But the worst comes when Edward dies and his youngest brother, Richard of Gloucester, tries and snatches up the throne of England from the legal heir, his own nephew, Edward V. This betrayal is what leads people to the famous story of the missing princes in the Tower.

Elizabeth Woodville, the then Queen of England, as the central figure of the story, can be said to be a very interesting, attention-gripping character. Described as strikingly beautiful and the descendant of Melusina, the goddess of water, Elizabeth is secretly practicing witchcraft as her mother does, as many people accuse her of doing. Though that’s not exactly why, or how, Edward IV is so enchanted by her, as the narrative suggests, it is what she wields as a weapon against her enemies. She doesn’t seem to be a strong woman at first, relying much on her mother and her brother, Anthony, to give her advice and political help. However, over the course of the story, her character evolves into someone more determined and more decisive, especially when it comes to spinning conspiracies, beating her enemies, and handling her husband’s promiscuous behavior. At some point in the book, the reader will find her becoming stronger and more ambitious, even more hateful and vengeful after the death of the king. She becomes the sly and shrewd dowager Queen who has to plot with her enemies against her own kinsman in order to safely put her son on his rightful throne.

As standout as Elizabeth Woodville seems to be, other figures of history in The White Queen do not just fall behind her. They’re not depicted in silhouette, they’re vividly described; especially Elizabeth’s mother, Lady Rivers, and her brother, Anthony, who, looking at their constant presence in her support, indubitably have the most carefully-handled portrayals of all and rooms to show them. So unfortunately, the supposed-to-be-highlighted figure in this story of Wars of the Roses, King Edward IV, is not told much and given many scenes to showcase his role. He is described waging wars—against the Lancastrian, Warwick, and his own brother George—wars which are, thankfully, pictured pretty well by Gregory, but his appearance is so brief and, before the conflicts even start to get more complicated, he’s dead. But that’s not something to bemoan, though, for the first-person point of view Gregory uses to tell the narrative already poses a problem. It is fine when Elizabeth is involved in the plot being told, but when the plot jumps to those involving other characters in other lines of time, the narrator’s voice sounds so vague and it doesn’t seem like it is told from Elizabeth’s perspective anymore. All that makes the sometimes-awkward narration excusable is the smooth pace. It doesn’t matter if the story is too long to follow, or if the conflicts seem to never end and even get more intense and intricate in the last 1/3 of the book, because the pace set by Gregory keeps it enjoyable to read on. The cliffhanger ending might become a problem for those who want a definite end to the journey of Queen Elizabeth of York, or an answer to the case of the missing princes, but I’m sure Gregory has a particular reason to end it with an open conclusion.

All in all, The White Queen is a fabulous story, a great read for historical fiction fans: full of conflicts, multicolored characters, meanderings of a plot, and a tense yet easy atmosphere. Though not quite satisfying in its use of viewpoint, it is still hugely impressive and a page-turner.

2 thoughts on “The White Queen”