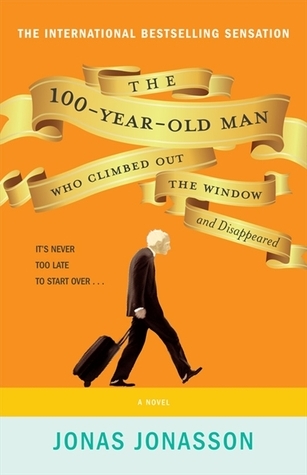 “It’s never too late to start over,” reads the front cover of the book. The world is too old and tired now to endure another war, so we might as well stop seeking any cause for making one. The 20th century had seen so many wars with weapons and bombs taking ridiculously innumerable lives, so many clashing ideologies and thoughts and maniacal egos. First published in English in 2012, Jonas Jonasson’s The 100-year-old Man who Climbed Out the Window and Disappeared cleverly, and packedly, summarizes the unpleasant international political history of the 1900s in a form of comically satirical fiction. Using an unbelievably old man character to represent the world we’ve been living in, the book brazenly makes fun of all those people and nations involved in the hideous, long-running war over isms and suggests that this old planet cannot bear it any longer, and that we should stop and start a new life altogether.

The story starts on May 2, 2005, when Allan Karlsson turns 100 but is all reluctant to celebrate his birthday. Without anyone knowing it, he climbs out his Old Folks’ Home’s room window and lands on the bed of flowers. Quite impulsively, he decides to go and walk to the local church, where his close friend is buried under its deserted yard. After a moment of life-pondering, which includes some wonder about his unbearably old age, Allan climbs an impossibly-high-for-an-old-man wall and sets off, determined to go to any place he can set his foot on. He already knows it, I suspect, that this time his sudden journey will be quite adventurous although not, of course, as grand as his long, explosive journey around the warring world in his young age, where he has to face and insincerely involves in the turbulence of then ideologies: fascism, socialism, communism, capitalism. Fate, or rather the ever-happening war, takes Allan from one country to another, and with his expertise in explosion he helps the world’s leaders plan and execute their battle against their enemies. He, as a forever apolitical person, does that not to gain any advantage, but rather just to save his own skin, to pay his debt, and sometimes because he is already sick and tired of killing innocent people.

Through its alternating back-and-forth narrative, The 100-year-old Man who Climbed Out the Window and Disappeared is blatantly trying to show the reader the folly and the blunder of 20th century’s wars taking place in almost every corner of the world: the World War I and II, the Spanish Civil War, the Chinese communists against the Kuomintang, the Cold War, the Korean War, the Vietnam War. Almost along the 1900s the world was never at peace, restless and ruthless in its inhabitants’ attempts to fly their ideological flags and get hold of the whole globe. And sadly, as it unfolds along the plot, flying flags was not enough, and so making bombs was in order. In fact, only bombs would do. However, it is plain to see in this Jonasson’s debut novel that it was awfully useless to wage a war over political views and ideologies, wasting so many innocent lives while we already knew who would win it, namely the fittest one (if you know what I mean). And now, the world is growing old and tired, as if wanting to die on its doomsday after witnessing countless deaths on its blood-flooded land. It’s time to stop, and it’s time to start a new day with a new hope.

The 100-year-old Man who Climbed Out the Window and Disappeared is written in a layered narrative, alternating the past with the present. The two distinct plots are not made intertwining, but neatly revealed in separate chapters. The stories of the history run as smooth as silk, no blotches, no creases, no holes, taking us readers along with Allan in a ride throughout the chaotic world. The flow of the present events, on the other hand, is a little bit in a mess and awkward at some point, making the reader question the writer’s judgement. But it’s still nice to follow, proving his capability to capture the reader’s attention with his charming ideas and humor despite the rutted storyline. On the whole, the narrative is relentlessly gripping, with its moves steady and never leaving the plotted path, even though it seems to be overlong, presumably to accommodate the many events in the history being told. I can tell that it is fast-pace and keeps the reader so far away from unnecessary boredom with its witty, implicitly sarcastic, satirical humor which I found achingly hilarious and, to be honest, sometimes annoying. In a way so fictional that no one should believe it, the book describes the world’s top influencing leaders of the 20th century behaving in a silly manner and doing fabricatedly unbelievable things. Yet I, somehow, find those made-up narrations quite representative, looking at how the world went back then. Unfortunately, I cannot say that any of the characters making appearance here is extraordinary or something, even the extraordinarily old Allan Karlsson. I just wish that more people have the same tendency to be apolitical as he does, and maybe this world won’t be so noisy with bombs. And frankly speaking, I quite like the way Jonasson pokes fun at those political leaders he’s chosen to describe, but not really the way he implies that Indonesian people are “dumb and corrupt”. Thank you for reminding us about that, Sir, though I don’t believe that we are too blind to see it.

Last words: The 100-year-old Man who Climbed Out the Window and Disappeared is definitely an exceptional novel, no doubt about that. The road to the ending and how Jonasson executes it are a bit groggy, but that’s the funny peculiar thing about this book. All I can say is that it’s not merely a comedy. It’s a comedy with wit, critique, and hopes for a better future.