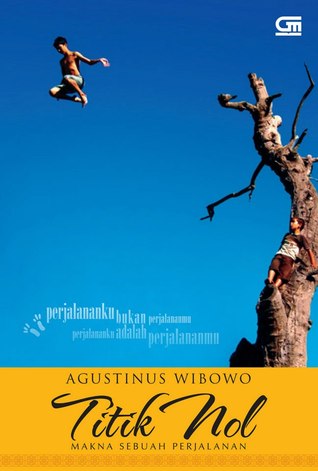 Why do people go on a long journey? Some of us have this perverse obsession with far away places, somewhere beyond our reach. We want to travel, we want to get out of the box and experience something odd. But at the end, after so many miles done and covered, what is our final, real destination? In his latest travel book, Titik Nol, Agustinus Wibowo invites us readers not only to once again glimpse what’s beyond distant countries out there, but also to see the true meaning of a journey. He seems to ask us to follow him going in full circle and then decide what the nature of our journey is.

Unlike his two previous books, Selimut Debu and Garis Batas, Agustinus Wibowo’s Titik Nol tells about how he begins his long, adventurous journey and ends it in the very starting point. He starts it in Indonesia, from where he departs for Beijing, China, to take his undergraduate study in computing. After four years being embedded in the land of his ancestors, he decides that he won’t come back to his home country, but pursue his long, deep-rooted dream: travelling around the world down to the zero point, South Africa. Abandoning all the benefits and privileges of a settled life and higher education, Wibowo sets foot in Tibet to see Mount Kailash, the holy place of Indian Hindu people which is not, in fact, located in India, for some borderline annexation reason. After going up and down that highest mountain in the world, where you can virtually touch the sky, he continues his journey to Nepal, and finds a heaven for all the backpackers stopping by: cheap motels and stuff, discotheque, Western food, enjoyment, everything. Kathmandu is a place for tired backpackers to boost up their energy once more. But while it offers a heaven on earth, boredom seems to be the nature of its existence. Soon, Wibowo finds himself ready to go on and arrive in India. It’s one of the biggest countries in the world, no doubt about that, with one of the biggest populations to boot. Along with its developing economy, there are poverty and crashed dreams of its people who are forced to accept the unfairness of the caste system. It’s full of deceit, manipulation, liars, uncivilized behaviors. But when he faces its “opposite twin”, Pakistan, things couldn’t be worse. Contradiction, hypocricy, wars and riots in the name of religion, it’s all there. Pakistan might not be as growing as India, but its two-face nature is no different. But the worst view presented in this book is, of course, the face of Afghanistan. Nothing precious but wars, nothing cheap but humans’ lives.

In Titik Nol, quite unfortunately for me, Wibowo gets more personal and brings up his family matter, alongside his stories of stopping by and staying in China and South Asian countries. The experiences of his adventures mingle seamlessly with the miserable memories of sitting beside his mother’s sickbed he narrates. I found it too dramatic, too sentimental, and too gloomy that at one point I fell into suspicion that he has abandoned his particular writing style, of which hilarity and witty are the characteristics. But it turned out that I didn’t have to worry. All his personal woe and widely opened family problems do not prevent him from writing the way he usually does: funny, smart, objective, critical, and unjudgemental. The plot is in a very good pace, too. The switching narrative unfolding Wibowo’s story of his journey and his mother’s dilemma in the sickbed seems so fused and produces meaningful life lesson, if you want to take it in.

Personally, to be honest, I don’t like how Titik Nol turns out much. I didn’t expect it to be too personal the way it is. I’m sorry for being rude, but I never want to know others’ personal business, which is here being revealed for all the world to see. I am a firm believer in “your business is yours, my business is mine”. I don’t think it is wise, for whatever reason, to wash your dirty linen in public. What I want from a travel book is a sense of experience that I cannot have because of my own limit, new knowledge and insights that I can only have by reading books. Knowing others’ family affairs is never my goal in reading, much less in reading a book like this. I am a little bit disappointed with this book, despite the fact that Wibowo originally intended to present it to his mother.

Overall, Titik Nol by Agustinus Wibowo is a package of “personal” experiences, both on the journey and beside the sickbed of his parent. I still quite like it, though not as much as I expected to, thanks to the knowledge and cultural insights Wibowo brings out to the readers aside from his personal woe and misery.