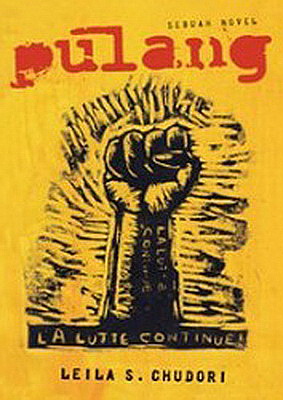 History is a blank page anybody can fill in, written from each of their point of view. It’s like a work of fiction, merely a story nobody knows the truth. History is not shaped by the actors, but the ruler. Who’s the ruler? Whoever at the top of the governmental throne. Once the ruler changes, the history changes in result. Demanding a fact revelation of the history is thus a very useless effort, and hammering what I would call “our version of history” into everybody’s head over and over is just as unworthy of anybody’s time. I’m not saying that Pulang by Leila S. Chudori, which was first published in 2012, is a useless book to read. In fact, it’s worthy of our attention, for it’s narratively well written, very well constructed even. But the fact that it’s only showing who’s the victim and who’s the villain doesn’t make it a good enough standard for history-based fiction.

Set in 1960s’ Indonesia, the book begins with a prologue where Hananto Prawiro, a communist-affiliated journalist, is arrested for his left ideology. He leaves a wife and three children, being executed without trial. His friends, Dimas, Nugroho, Risyaf, and Tjai are dispatched abroad to attend an international seminar on journalism, and can never come back for their allegedly same political affiliation. Being on the radar screen, they don’t have any choice but to stay on the run, hopping from one place to another, from one country to another, breathlessly hunting for an identity like, borrowing from Dimas, “a soul chasing after its own body.” After three years of wandering, they finally settle in Paris as political exiles. There, Dimas meets Vivienne Deveraux, a beautiful Sorbonne student who catches his instant attention the first time they clap eyes on each other. He knows he’s still running from the government’s dictatorial grip, he knows he’s still in love with Hananto’s widow, he knows he’s still seeking something he doesn’t even know how to call, but he can’t help getting tangled in a marriage web with the French girl. Together, they have one daughter, Lintang, who follows her mother taking study in Sorbonne University. For her final assignment, Lintang has to do research on what actually happens in 1965 and the unfair treatment toward the families and friends of the members and supporters of Indonesian Communist Party. To that end, she gamely sets foot in the motherland she never knows, and risks being detected as the daughter of an exile. But that’s not the only ordeal she has to deal with, because she’s also in danger of falling in love with Segara Alam, the youngest son of her father’s former lover, and forgetting about the man waiting for her in Paris.

Pulang is filled with “ordinary” characters, not that they’re not superbly described, but they’re just like those who are living next to your door. They are not unique in any sense, but they are interesting, making you think of some saying that less is more. Dimas Suryo is a free agent, I would say, never keen on being tied to anyone or anything, love, politics, religion, ideology. He can’t even look at his girlfriend dead in the eye and say that he wants to live with her forever. That very trait makes him a fickle man, someone you cannot rely on. Sadly, that’s what he passes on to his daughter. Smart and beautiful, Lintang Utara becomes inconsistent when it comes to love. She’s a woman who doesn’t even think about settling down. It is such a shame that Chudori has to depict her as uncertain and indecisive, for I always think that a smart girl must know what to decide. But people do have faults, no matter what their good qualities are, and questioning it would come to naught. Speaking of faults, I must say that I have a particular interest in the characters of Hananto Prawiro and Segara Alam, who are both promiscuous, brave, and rebellious. I cannot say that they’re characters I’d like to cherish, but I have to give credit to Chudori for describing them in a very manly, very virile way. She really succeeds in portraying them, in my opinion.

To call Pulang a work of historical fiction doesn’t feel right, but calling it a romance novel is also wrong. And it does not essentially fall into historical romance genre, either. It has several elements blended together: drama, romance, and history of the 1965, which is thought of as the darkest and the bloodiest in Indonesian historical record. Chudori has succeeded in weaving deftly those elements together into a wonderful narrative. It’s just a crying shame that she doesn’t present the historical aspect in a quite objective way. By this book, she seems to merely pour her sympathy to the victims and cast aspersions on the villains. Not that I’m on the New Order’s side, but what happened in 1965 didn’t stop at those who held the throne at that time, if you know what I mean, so we cannot blame it all on them. It’s quite disappointing to have such judgmental tone, while the book has actually many great qualities. It has a great story, with parts nicely arranged and enjoyable to read, and also a very strong narrative. Its segmented plot is not hard to follow, running smoothly to the open, intriguing conclusion. I only have one objection to the writing, namely its diction. Chudori doesn’t seem to completely determine what language she should use, sometimes it’s too formal, and sometimes it’s too casual. Some words aren’t even put in the right place, for the right sentence. I found it a little bit awkward to read at some point.

All things considered, Pulang by Leila S. Chudori is a wonderful work, a wonderful story. Only it doesn’t have the objectivity I need in a work of historical fiction, if it falls into that genre. It has a great basic idea and marvelous, down-to-earth characters. I wish I could like this book more, but for all the faults it has, I really couldn’t.