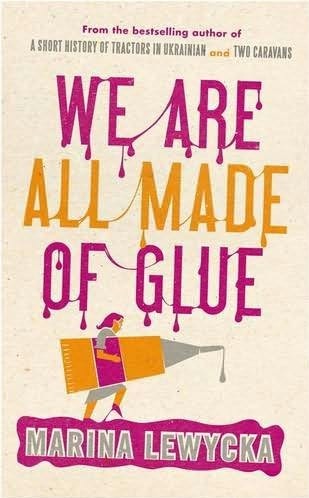 Unlike in her two previous works, in We are All Made of Glue Marina Lewycka comes up with an issue about Israel-Palestine conflict. Through this third book of hers published in 2009, Lewycka doesn’t try to take sides, nor defend anyone, any religious beliefs, any peoples, or any nations involved. With her typically hilarious, witty, annoyingly slapstick style, she seems to try to use an analogy to explain, from her personal viewpoint and understanding, what actually happens and why nobody should take the blame.

Georgie Sinclair is on her way to dissolving her marriage to Rip, her husband, after an impulsive, childish fight over what is more important: a toothbrush holder or a social project to save the world. Before the divorce is even final, she decides to move to a new house in Highbury. There, she meets the mysterious Mrs. Naomi Shapiro, who picks reusable things from trash cans like a scavenger and lives in a big, dirty, run-down house called Canaan House. Georgie then discovers that the old Jewish woman lives alone with nobody to care for her or even to take care of her living place. So she tries to help in some ways, bringing her food and wine and helping her clean and maintain that hovel she calls home. But then a problem occurs when Mrs. Shapiro gets an accident and the social worker forces her to sell the big house and move to a care home for the elderly. Mrs. Shapiro asks Georgie to save her from the terrible ordeal and not to let anyone sell the house. In the midst of fulfilling Mrs. Shapiro’s request, Georgie finds fragments of the mystery surrounding Canaan House and the old woman’s true identity, which is related closely to the founding of the country Israel for the Jews in the land of Palestine. Through her secret investigation, Georgie, who knows nothing about religions much less about international politics, discovers many unbelievable, horrifying, bloody facts about the conflict between Israel and Palestine.

I find it interesting that the story is narrated from Georgie’s point of view. As a freelance writer, she is described as melancholy, childish, a little wild inside, but loving and helpful. She is a representation of average, ordinary, innocent people who only get information from the media and know actually nothing about politics at all. She is like many other people, looking at the conflict between Israel and Palestine from the outside and sometimes daringly drawing their own conclusions. On the other hand, Mrs. Naomi Shapiro is a Jew who tends to draw a line between “us” and “them”, but she loves peace and animals. What funny is, she is also portrayed as an old woman who likes to act and dress like she’s still young and beautiful and flirt with a much younger man. It is in her nature to do everything for someone she dearly loves, and that’s what brings her to the territorial conflict over the Canaan House she’s been living in for years.

When you peruse the whole narrative carefully, you will find that Lewycka uses the Canaan House as a metaphor to describe the condition prevailing in the land of Jerusalem. Some of you may not agree and think that it’s a false description, but I think what she elaborates here is quite fair. No one to blame, nothing to claim, nobody can even say whose land it is. And at the end, it’s a very silly thing to fight over it when everybody has a share. As always, Lewycka never tries to give any solutions to the problems she addresses in her novels, she only wants to indirectly say that fighting and warring over something never benefit anybody and eventually will only screw what a little peace we have up.

We are All Made of Glue is packaged as a slapstick comedy with a touch of drama. It has all the features we usually find in Marina Lewycka’s writing: funny, full of typically British humor, but the narrative runs deep and is detailed in addressing the issue she brings up. From this book, we can feel some kind of invitation to make peace instead of giving up to our gnawing desire to possess something. A bond between two people, here it is symbolized by glue, is more important than anything: conflicts and differences, our homeland or where we should live, or maybe our personal/political interests. The narrative includes the idea in a rather subtle way, and not even for a second Lewycka tries to dictate to the reader what they should think about it. But, I have to say, reading this book is a very fun way to understand such an issue from a different point of view. Only the plot is not as amazingly delivered, it is too slow at the beginning and then seems to run quickly to its end. Also, the way to the conclusion of the conflict is not as smooth as I expected before, and at the end of the book everything seems to be just okay all of a sudden.

In conclusion, Marina Lewycka’s We are All Made of Glue is an amazing work, with an extraordinary idea and interesting content. The characterizations are all well-depicted, in a hilarious way, too, as Lewycka’s distinctive feature always is. Despite its awkward plot, the narrative is still captivating and gluing us to the end. It’s very much recommended.