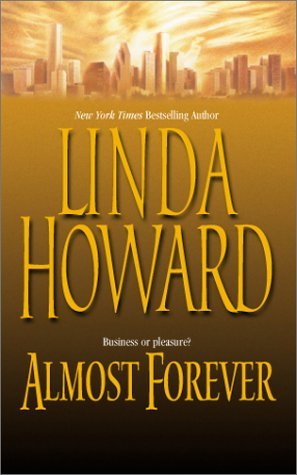 I couldn’t, even now, find any reason for falling for this book, since every romance seems to have the same formula and I never have particular fondness for any kind of romance, be it historical or contemporary. I do read romances, occasionally, but I’m not specifically the fan of the genre. So when I found myself liking Almost Forever quite much, I decided that this book by Linda Howard must have had something about it. Although, after perusing it closely, I didn’t find anything special, Almost Forever could really leave me content and light.

It’s a contemporary romance about a dilemma of love and business. Max “Benedict” Conroy, a rich English nobleman who’s working for a huge American company, is dispatched to Houston by his employer to sneak up some very important, confidential information from their competitor so that they can take a step and acquire it. But he is about to do it discreetly, just so not drawing any unnecessary attention. This secret mission, unfortunately, involves the sweet and shy secretary, Claire Westbrook, a broken-hearted widow who’s been trying to mend her heart. It is just inevitable then that Max has to approach her, intimately, to get the said information. Only it’s too late for him to realize that what is meant to be business in the beginning, turns out more than a little private in the progress. It’s not only the information that he wants from her, but also her heart and body. As soon as he gets what he has to, his desire flares hot while the woman slips away from his manly fingers.

As far as I can tell, romances have explored many kinds of characters, but there is one particular trait that never ceases to exist in any of them: stubborn. Stubbornness, be it strong or weak, has been so common in romance stories that I start to think if it is compulsory to have a character labeled with it. While Claire’s insecurity till the end of the narrative can be thought to be unrelenting, Max’s persistence to have everything his own way can be misleading to the eye of certain readers. Fortunately, as much as I don’t like it, either, Claire’s character is blurred by her indecisive manner. She seems not to be able to say no, yet she won’t easily move on from her heartbreak to a new chapter of life. The whole characterization of hers is not something I, as a woman, would cherish. It just seems to me that her so-called “logical decision” is too made-up, being so merely to accommodate the run of the story. On the other hand, Max has that control freak behavior to add up to his package. He is a gentleman, no doubt about it, but he is too arrogant about what he wants and what he wants to, and has to, have. Though I cannot say that this kind of male character is embedded in every romance tale, at least those I’ve ever read, but it is quite common, so common even that I start to imagine if all those romance writers are of the same mind. And, to be honest, a rich, control freak man is not something I’d cherish, too, when I’m reading a romance. Max is undeniably driven by a strong feeling, either true love or lust, and some part of him is just adorable, but I still find him a little bit too much for a man.

What makes Almost Forever compelling reading is its lightness and sweetness. The narrative is, though I would rather not call it exceptional, very much engaging in its own way. The storyline is also not different from others in the genre, which ends happily ever after like any other fairy tale. There is something quite awkward, however, at the end of the book, which makes it seem that the author wants to put a barrier, for an indefinable purpose, before ending it in a more sweetly convincing way. I have to say that this choice of finishing scenes is quite disappointing, rendering it unconvincing instead and forcing me to arch my eyebrows while I was expecting to get a definite ending for an emotionally draining love story. It’s very much odd, really. It’s like driving a car and it’s stumbling uncertainly forward before halting to a stop.

So, in conclusion, I’m not going to say that Almost Forever is a great work of romance as a whole, but I liked the story and the sweet atmosphere shrouding it. It’s light, it’s nice, it’s lovely, despite the uninteresting characters and the simplicity of the plot and also its awkward ending.