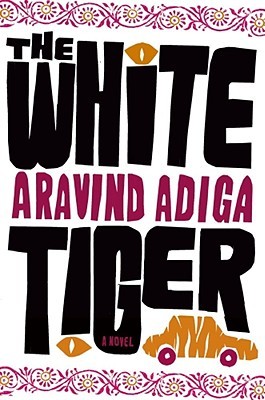 It’s pretty hard to find a great fiction book which is both entertaining and able to remind us that many things are not what they seem to be. Aravind Adiga’s The White Tiger is one of those literary gems we rarely discover among so many notable works. Adiga’s sarcastic manner and dark humor help the book present itself as a piece of criticism in style. His bravery and unbelievable daring to write about his country in a “poke-fun” way of narrative make this debut worth reading even more. Not that I support sarcasm, but the brutally honest way in which Adiga sees his country and its people triggers a certain amount of weird amazement in me, despicably yet respectfully.

From the viewpoint of Balram Halwai, the story unfolds before the reader’s eyes by way of a very long letter for the Chinese prime minister, Wen Jiabao. Knowing Wen is going to India to learn how the entrepreneurship runs there, Balram writes to him right away, telling him about his wonderful “success story” and describing, in a darkly ridiculous way, his long journey to become the true entrepreneur. In a nutshell, Balram is just a poor man like any other one you see in India, forced to drop out of school despite being prophesied to be the white tiger, waiting tables in a tea joint, jumping from waiting tables to working as a chauffeur, and, lastly, deciding to commit a murder. In his estimation, murdering his boss is the only way to master his own destiny, to get out of every restriction and limitation denying him the successful life he always dreams of.

Balram Halwai is a representative of the victims of Hindu caste system in India, doomed to imprisonment in the Chicken Cage, condemned to a life of the pauper. He is just an ordinary poor man who wants to be rich, but unlike any other poor men in other parts of the world, the caste system he holds in distaste prevents him from pursuing the success he wishes he could reach. He may seem innocent in some ways, but he’s not a man of resignation. His evil nature and his refusal to stay poor for the rest of his life spur him with such great force to rebel against the system he is living in and do everything people would think criminal and morally wrong. At some point, in the middle of his crime scheme, readers may think that he is actually smart and sly, that he’s not that innocent. But that characterization comes later when he’s learned his “lesson” and experienced many unpleasant things.

What so regrettable about the character of Balram, in my very personal opinion, is his description of Muslims. It’s not that I naively don’t realize that Balram is portrayed as an “innocent” person with no knowledge nor education, but somehow I found the way he describes Muslims as illiterate and stupid and keen on bombing everything very much repellent. I know I shouldn’t demand him to know that all those bombings are only an act of evil politics and have nothing to do with Islamic teaching, but I really wish I could tell Balram not to be smart only in the money department. However, looking at the sarcastic manner in which Adiga tells his narrative, it just makes a very good sense to have a character rambling on uncontrollably about anything, including the false stereotype of a certain people.

Adiga is actually very genius at making a story and has a considerable talent for writing it in an entertaining and captivating narration. The White Tiger is undoubtedly a gem of a book. Though irritating in some ways, the sarcasm by which it is told is just in the right amount of dose. Also, it has a nice plot to follow, not too hasty nor too slow. It’s proven in the steady step-by-step progress Adiga sets to bring to the climax and the conclusion at the end. He starts it with Balram’s childhood, blended with the description of his family and the society he lives in, and then elaborates how Balram is dragged from one underpaid job to another, and ends it up with Balram being a criminal. The pace is undeniably absorbing, so incredible that you’ll turn the pages without even realizing it. And I have to give Adiga certain credit for portraying such detailed characters in the book, and it’s not only Balram. Every one of them seems alive and believably real. They are one of the reasons I really like this book. But what the most tickling about The White Tiger is the devilishly honest way it is written. These days, criticizing everything around us is not a new thing anymore. Everyone is a critic now. People can channel it into anything, books, music, movies, random articles. What Adiga does with his The White Tiger is something people should take for granted, but his forthrightness in delivering his criticism is just frustratingly indescribable.

So, overall, The White Tiger is an intriguing fiction book about something which is actually non-fiction. It has, I should say, everything you want in a work of modern popular literature. Such a shame, had I not had a personal objection to some parts of it, I would’ve given it higher praise.

2 thoughts on “The White Tiger”