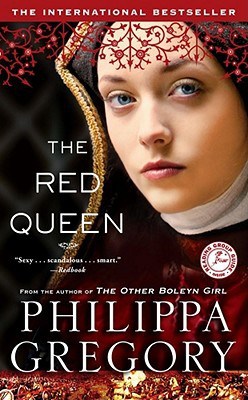 Ambition is a necessary evil. At least, that’s the after-reading impression I got of The Red Queen by Philippa Gregory. It seems to try to say, out loud, that anyone should beware of women with ambitions, for they are more than willing to sacrifice everything they have to achieve their lifelong goals. The Red Queen is not about a merely average woman with an ordinary ambition. No. It’s particularly revealing a story of a woman of noble family with a huge ambition, Lady Margaret Beaufort of the House of Lancaster. Set in the 15th century, this second book in The Cousins’ War series is a fictionalized witness to the road Lady Margaret gamely takes to fulfill what she believes to be her true destiny, which is shaping the course of the English history.

The absence of a much-needed heir to the throne of England forces Lady Margaret Beaufort to assume the responsibility to produce one on behalf of the king, Henry VI. To keep the House of Lancaster lasting has been Margaret’s inalienable duty since her birth, hence the need of an engagement to a man of royal family, despite her being only seven. But the betrothal is suddenly canceled by the court, leaving Margaret a fair game. It is not long, though, until she is engaged for the second time around, and this time to Edmund Tudor, the king’s own stepbrother. The wedding is held when she is not older than twelve years old. And despite his own remark that his wife is just little more than a child, Edmund doesn’t seem to have any guilty conscience about consuming their marriage brutally at their wedding night. As a child, Margaret can only say nothing and do as she’s told.

Margaret’s life as Lady Margaret Tudor never sees better times, with no fortune smiling on her. Apparently not enough that she gets ignored by her cousin, mocked and pushed around by her mother, married at age twelve to someone she doesn’t even know, later she still has to deal with her husband’s death, dangerously almost die in childbirth, and marry another, and then another, noble man who’s much older than she is. Worse yet, she cannot nurse and rear her own son, Henry Tudor. Margaret’s adulthood is described to fill only with bitterness: loveless marriages, treachery, wicked game plan, secret, unsaid love, war, hatred and ambition. But she always knows, without a trace of doubt in her mind, that she is doing a holy duty whispered by the angels to put her son on the throne of England and to become the king’s mother.

Lady Margaret Beaufort could be described as arrogant, selfish, hateful, self-righteous, and, most of all, ruthlessly ambitious. She is definitely not a depiction of a protagonist in any fairy tale. She is a depiction of everyday people whose upbringing and experiences have the most impact on their lives. Margaret is raised without love and attention. She is doomed to duties and restrictions. She is restricted only to the use of bearing an heir, ignored and humiliated by almost everyone she knows, unappreciated for not being physically beautiful. She lives with horrible events, tragedies, injustice, and bad treatment. As a child, she has to go through many hardships. As an adult, she is forced to face intrigue and treachery. She is what she is not merely because of her forever embedded ambition, but also because of the way people treat her. What clearly positive about her, however, is her strong determination to achieve what she sees as her predestined goal, and her sincere faith in God. I can say that this Lady Margaret, the one fictionally described by Gregory, is a real strong woman. She doesn’t need to have muscles, or fight and wield a sword, or stand on the front line of a war zone to prove it. Her stubbornness, her sharp wit, her persistence to survive, and her strong will to deal with anything have proven it all.

The Red Queen is composed of a little bit history, a little bit speculation, and a little bit fiction. Since I’m totally blind about the English history, I cannot tell which is which. However, seemingly, the character of Jasper Tudor is one of those that fall into the category of fiction. It is one thing that I deem regretful. His unsaid, speculatively secret affection for Margaret is one of the things that help develop the narrative into an engaging, page-turning, marvelous story. Gregory builds the plot patiently, without too many details though, and gathers all the necessary components together to create a logical description of events from the perspective of Lady Margaret. The storyline is thus easy to follow without much confusion, yet is vastly telling. The easy language used by Gregory makes it even more enjoyable to devour. The portrayals of Margaret’s mother, Jasper, King Henry VI, and other supporting characters are, in spite of being from Margaret’s subjective point of view, very much believable and strongly convincing. To me, The Red Queen is purely perfection, having no flaw of any sort. Even if there is one tiny defect, it is that, I think, it should have been written in a more classical language.

All things considered, Philippa Gregory’s The Red Queen is truly a masterpiece of historical fiction. It has a great story, strong characters, a captivating plot, and the best formula of the genre I’ve ever known so far. Reading it was one of the best experiences I’ve ever had in all my time of fondness for modern literature.