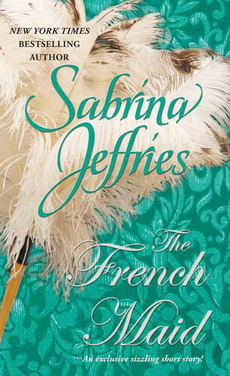 What do you really want in a short story? A short story is nothing more than simplicity. But something simple can sometimes be more satisfying than a long, intricate masterpiece. Sabrina Jeffries’ The French Maid is a great example of it. Set in a historical period of England, this work of romance suggests an idea about beauty and insecurity, two things women are always associated with. Jeffries may not be the only writer, or rather, the only female writer, who explores this particular theme, but here in The French Maid she plainly elaborates the main problem with women’s self-confidence through a story of a troubled marriage.

The story introduces us to Henry, Lord Langston, a very busy British prime minister with indifferent nature and not much attention for his plain wife, Lady Eleanor Ruskin. He’s too drowned into his work to allow himself time to come to her bed, or even to dine with her. While on the other hand, Eleanor never fails to attend to him, obey him, do what he wants her to, do everything. It is then unsurprising to see Eleanor having an issue of insecurity, unconvinced that she’s beautiful enough to make him love her. Well, it is true that Henry marries her for her father’s political connection and her mother’s outstanding position in the society. But it’s also true that Henry has a thing for her, a certain affection for her, albeit it doesn’t show. So there is this bit of misunderstanding going on between them. But it is not long until comes a French lady’s maid named Babette. The coming of the maid becomes such a blessing for Eleanor as she washes away her insecurity, beautifies her, makes her a sexy nightgown to seduce her husband to her bed, teaches her how to be confident and tells her not to give up her husband’s love before she tries to win it.

The characters of Henry and Eleanor may not be the typical stubborn couple Sabrina Jeffries usually sets for her novels, but such a shame that she doesn’t seem to explore more of their nature. I can see that Henry is a sad and wounded man, deliberately setting himself to become a stiff person without love and compassion. But the lack of detailed description makes him only appear to be someone indifferent and fearing love. The revealing change of his character almost at the end of the story is merely encouraged by Eleanor’s sensual surprise for him and the passionate lovemaking it spurs. Once again, as ridiculous as it may seem, I cannot agree with the idea that sex is the answer to everything, especially to the problem with a person’s personality. It’s truly a downside of the whole characterization. The positive side is, to my relief, that Jeffries describes Eleanor’s character better, both physically and mentally. Everything about her is well depicted, her insecurity, her restlessness, her deep love for Henry, her physical lack. At the very least, Eleanor can shoot through the narrative and attract the reader’s attention.

The French Maid is a unique story, I’d rather say, and the final execution of the idea seems too clichéd. But that’s what we get when we read a romance. Nevertheless, the issue of insecurity is always interesting to discuss, especially in the realm of womanhood. There is always a notion that men try to love women they are attracted to, so without a pretty face, or at least an attractive looks, there will be no love. This is what subtly yet vividly proven in The French Maid. Without trying to degrade the womanhood nor the importance of sincerity in a love relationship, Jeffries wants to point out that love can be fought for, must be fought for, even if by way of beautifying ourselves to catch our loved ones’ attention. This may sound a bit sexist to some people, but we have to admit that beauty and sexuality have been parts of feminist ideas these days, and romance is always on the front line to suggest and spread those ideas. Beauty is not the only deciding factor, though, for there are many other things to consider in making a relationship work, as we can see at some point in the story. Jeffries is really genius at concocting all those complicated things in a light but gripping narrative, and she formulates it very well, without leaving a hole in it. The plot is nicely flowing and the way Jeffries unfolds it is very sweet.

All in all, The French Maid is a very nice short story. It may be too packed and lacks of detailed characterization on Henry’s part, but the idea is very natural and the run of the story is just sweet and romantic. I can say that this is what romance writers should write about. And this is really something I would recommend to any romance readers, and other readers who want to get more insight into a bit of women’s issues.