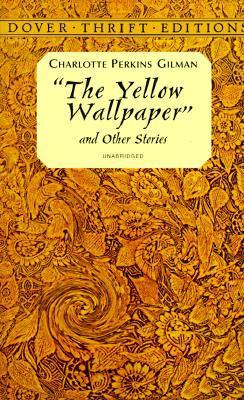 Women’s problems have been recognized through the ages, and will continue to be so. They’re perpetual things that are impossible to resolve by means of any ideas, any politics, nor any regulations as long as women exist. Even as the world changes, so do its various societies and cultures and thoughts, women remain the most problematic sex of the two. Women’s problems will never cease to roll out because they get along with personal subjectivity, depending on how people of each society see a woman as a human being. They are numerous, diverse, complicated, insolvable for there never seems to be any satisfying solution. And some of them are crammed into a collection of short stories written by Charlotte Perkins Gilman. I cannot say that The Yellow Wallpaper and Other Stories, the title published by Dover in 1997, is able to contain all of the problems suffered by women, nor that it provides even the most decent solutions to those problems, but it at least gives us a flash of insight into what women of her era and society had to undergo as human beings.

The collection consists of several short stories, but there are only some that really got my special attention. The third number, The Cottagette, brings out a story of a woman who falls in love with a man by the name of Ford Mathews, one who is too good to be true in a real life. How the story ends, I would say, is so much like how those of romance novels conclude. It is clearly the embodiment of dreams of most women, the thing that would surely be very much preferred by women of any age and society, that would make them dance on the cloud nine. Meanwhile, on the other side of the coin, the story Turned brings back the unpleasant memory of trouble no woman ever wants to get trapped into. This is a story where women are warned and alarmed that they are facing what I would call the natural “animal” instinct of men. It doesn’t matter that they already have a beautiful, capable, loving and trusting wife, they seems to be unable to stop themselves from touching another woman. It’s not a made-up story, it’s real and it’s everywhere around us. We just have to turn our head and we’ll find it. I liked it when Mrs. Marroner finally finds out about what her husband has done and says:

By saying that she realizes, and is convinced, that it is not her servant’s doing, but her husband’s. Looking at the innocence, incapability, and ignorance of the said servant, Gerta, one cannot possibly blame her for what has happened, although we cannot omit the likelihood that the case can go the other way around, in a much different circumstance. There are several things to consider: who is the superior one, who is the seducer, who encourages the deed, and who has the power. There is also a fact that some women are not strong enough to say no and act on it.

And there is this particular story which intrigued me most about a woman who changes places with her husband. It somehow tries to suggest that if a man were a woman, he’d surely understand her problems, her needs, her wants, her feelings, and her position. It intrigued me not because such thing is impossible to happen in this real, cruel world, but because I don’t believe that a man can probably understand what it is like to be a woman even if he puts himself in her shoes. Roles can be reverse, but I cannot say the same for emotions. It is us only who can understand fully the state of being ourselves, not the other people, much less the other sex.

The Yellow Wallpaper and Other Stories is a convincing collection of stories about women, one that can perceptively look into and beyond the problems of women, the state of being a woman. I found each narrative well-written and succinct, kindling fervently our sympathy and empathy. Women’s problems are changeable, responding to the ever-changing world, but I believe these short stories written by Gilman, at least some of them, are still relevant. They have several different female characters, with different portrayals, too, but those women described in each story are definitely one representation of the entire womanhood. I may not agree with some ideas subtly conveyed in some of the stories, for I have my own opinion about some things, but don’t we all? Women’s issues are not subjected to objectivity. What becomes our problem, is what we see as a problem.

Finally, The Yellow Wallpaper and Other Stories is an interesting book. It somehow doesn’t show how to solve the problems of women, but at the very least it’s successful in catching the existence of some of them. I have to say that I wasn’t too much impressed by some of the tales being told, but generally it woke me up to become aware of my self and my surroundings.

1 thought on “The Yellow Wallpaper and Other Stories”