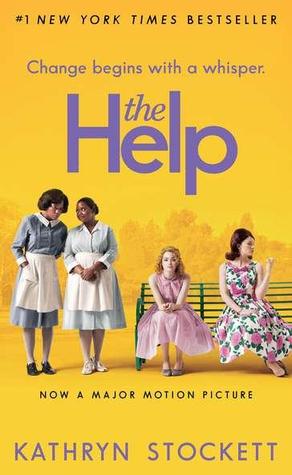 After hundreds of years, slavery is still an interesting, and intriguing, topic to discuss. Even at this time, where black celebrities become the idols of the Western entertainment industry and black popular culture start to conquer the world, the suffering their race had to endure in the past never seems to cease to matter. It’s as if their glorious victory in the 21st century can never erase the hardship recorded in their black history, as if everyone wants not only to complain about it, but sing about it, make a movie about it, and write about it. And Kathryn Stockett is one of them. With The Help, first published in 2009, Stockett seems to want to remind us once again of the discrimination and segregation the white people put them through back in 1960s, in the Southern part of the USA where anything regarding the black race can be very much political.

The book sees the life of the city of Jackson, Mississippi, a place where Skeeter Phelan, a white young woman, is witnessing the pretense, lies, excuses and justification of her own race for discriminating and segregating black people in order to keep them where “they belong”. As a white child raised by a black maid, Skeeter has grown up having compassion for those who are racially despised by her people. When her former maid, Constantine, has gone vanishing without leaving a trace, and without even anyone telling her what has actually happened, she sets herself to search for the answer. But the road she has to go through to get it is too rife with obstacles in the form of dangerous situation and white politics played by her own beloved ones.

Aibeleen and Minny Jackson are parts of this situation and the victims of the said politics. While Aibeleen is lucky enough to be the help for the Leefolt family, taking care of a lovely little kid Mae Mobley, albeit she is treated differently and indifferently by her employer, Minny has to bear being accused of stealing by her employer’s daughter, Hilly Holbrook, and gets fired right away. It’s by sheer luck that she can finally find another job, waiting on Celia Foote, a strangely sexy newcomer in their city. But, as the time passes by and their fates as servants to the white employers never turn the better way, they get irresistibly persuaded into telling the truth about what it’s really like to work as black maids in the white families, into speaking up their suffering and difficulties resulted from merely being blacks and racial discrimination their race continues to shoulder since the time of slavery.

Perusing all the characters, I come to think that Skeeter Phelan is quite interesting. It’s not only because of her sincere compassion for the blacks, or her bravery to do something which might be considered dangerous in her time and place, but also her attitude towards her people’s racial hatred and superiority aimed at their “lower” opposite, how she stands firm, though in secret, in her opinion that everyone should get equal rights and justice. She is a strong woman with a strong mind, and she shows it in words. Minny and Hilly are also “awesome” characters, very well described through the narrations of their behaviors and dialogues. But it is the character of Stuart Whitworth that caught my eye. He once says:

“She, the one who took her clothes off for that guy—said I was a whore to my daddy, a whore to Mississippi.”

That line has struck me vehemently and driven me into thinking that that’s what we all are to the world. That particular line does not only reflect the irony of the character of Stuart Whitworth, or of Hilly Holbrook, for that matter, but also sadly reflects the irony of ourselves. When will we ever stop worshipping a certain belief, ideology, mindset, and even politics like a God, and abandoning the sense of justice and humanity? When will we ever stop casting dark shadows on the character of “others” and use it for pure benefit of ours?

The Help does not provide a clear answer to those questions. But at least it provides us with a lit way to ponder carefully about the nature of a multiracial society, wherever it is, and get rid ourselves of discriminatory behavior and practices. The book is real in how Stockett creates and describes all the characters, including the black way of speaking English, builds and develops an enticing plot, and tells the history-based background of the city of Jackson. It’s hilarious in a dark way sometimes, and frightening at the climax. It grips you at some point and will not let you go until you get the implied message and come to understand the suffering of black people through an unbiased lens of the author. The Help is certainly magnetic, with its nice narrative, sometimes-funny dialogues, and detailed characterization.

In other words, The Help is fully recommended. It is one of the many insightful ways to see the pride and prejudice of a certain group (we) against the other (they). It is a commercial novel, no doubt about it, but it is also, I believe, quite influential.