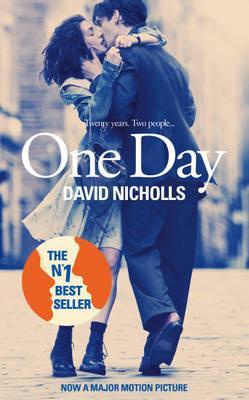 True love may be too much boring and trifling to talk about, or even to make a fuss of. But it is an undeniable fact that true love never ceases to arouse people’s curiosity and therefore keeps its unwavering position as the idol of the book industry. And, as much as it has been merely, and completely, rubbish for some skeptics, not many people, or authors, are capable of creating, and then developing in the process, a magical and sweeping, yet down-to-earth, tale of true love. David Nicholls is one of those few who could come up with a bright idea of a romance and manage to skirt around being cheesy in telling his creation of a love story. His One Day, first published in 2009, shows the reader the sensible way of love over the bumpy, twisting road of life and consistent changes of characterization. Its twenty years of range does not only encompass two people, but also the meaning of friendship and the normalcy of unpredictability.

The story opens with a graduation night the two people, Emma and Dexter, spend together cuddling up and talking and occasionally kissing. Despite the intimacy, they are not lovers in any way, putting aside the fact that Emma has been in love with Dexter all along since the days of her study at the University. The awkward night turns out to be nothing and ends up with them going separate ways. But their friendship persists, with Emma being stuck in England grieving over her despair, desperately unrequited love for Dexter, and a job she hates to do while Dexter is taking his time having fun, traveling around the world without thinking, or even knowing, about Emma’s feelings for him. This unbearable phase goes on until Emma can no longer wait anymore for Dexter to get aware of her affection, and then moves on to having a relationship with someone who really loves her.

The time passes by and once again Em and Dex’s friendship recovers, only it has to happen when Dex suddenly falls in love with another woman and, for the very first time in his entire promiscuous life, decides to get locked in a commitment. This whole complicated situation brings Emma to reluctance to be Dexter’s shoulder-to-cry-on when his legal relationship strays off the path. But later on, as divorce and a ruined career drag him to a whirlwind of desperation and lacking of self-confidence, Dexter realizes that he will always come back to Emma, the one and only woman who can be his best friend and give him unconditional love.

The characterization of Emma and Dexter is not a one-stage, one-whole portrayal. They change over time, affected by what befalls them and what uncontrollably happens to their lives. They are not basically honest people, and what they do or decide to do is mostly not in accordance with what they truly think. They are naturally deceitful, in some ways, neither evils nor angels in a fairy-tale sense of the words. And they are also uncertain, selfish, committing faults and defects. They both experience a sense of insecurity at some point, too. They are not perfect characters because they are perfect, but because they are humanly flawed.

One Day is a very well-told story. Its twenty years of range is cleverly divided into twenty or so chapters started on the exact same date every single year. That way, each chapter does not only see the run of the plot or the leisurely yet steady pace of the story, but also the significant changes of characters and the turns of road marking the development of Em and Dex’s relationship. Nicholls is not talking about the nonsense of true love here, but how true love is perceived in a rusty relationship maintained long enough only by the bond of a true friendship. Em and Dex do not love each other, and Dex is too promiscuous to be a romantic, devoted man who will do anything for the one he loves. He loves himself too much to do that, while Em, albeit her love for Dex never fades with time, knows where to stop and say no and then bumps into an undecisive manner. Truthfully, I can say that One Day is a natural (love) story, delivering only natural sequence of events with natural characters in it. It is well written, except that it’s sprinkled with too many unnecessary slapstick jokes and lacks an emotional atmosphere to make the reader cry, which is, I think, quite essential in a love story, however realistic it might be.

All in all, One Day is a great love saga, a great work of (romantic) general fiction, though perhaps not so enjoyable for some mainstream romance readers. Its ending doesn’t give us any satisfaction, either, but at least there is a trace of sweetness left on the last page. Thus, I highly recommend this book to everyone, to every reader out there.